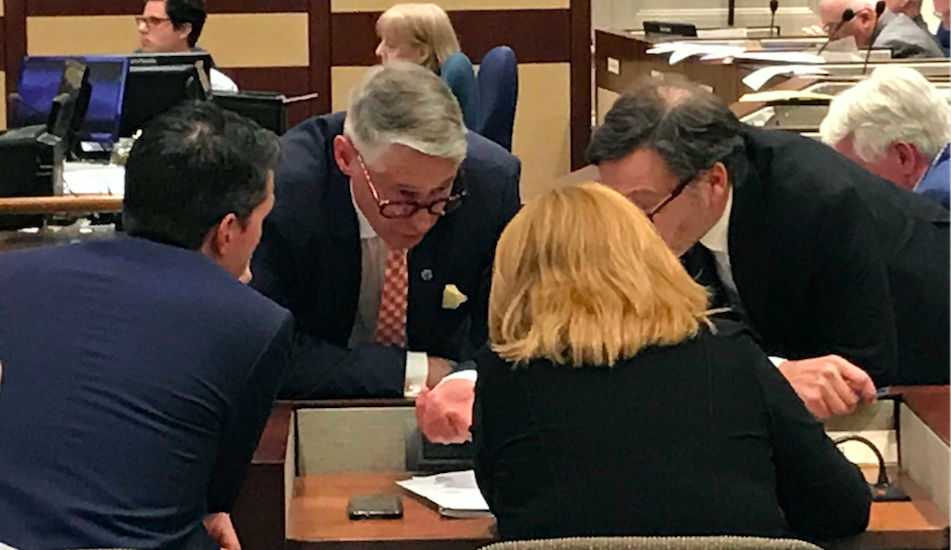 You can't fault the customer service.

City council voted on Tuesday to move forward for the second time with a public hearing for the controversial Willow Tree development at the corner of Quinpool Road and Robie Street. The decision was made after a last-minute scramble to once again rewrite HRM’s planning bylaws in order to best suit the financial needs of developer Armco.

Previously, had rejected a development agreement for 20 storeys on the site under the advice of George Armoyan’s property firm, who advised the city in an unsolicited update last year that the shorter height wasn’t profitable.

Instead, the city moved forward with a 25-storey proposal that would include 10 affordable housing units and some other public amenities like the burial of overhead electrical and telephone wires.

But according to the staff report before council Tuesday, “undergrounding” those wires would be extremely expensive for Armco, and the company feels shouldering that cost on its own is unfair given neighbouring landowners would also benefit from the burial.

Councillor Shawn Cleary, attempting to help, put forward an amendment whereby the developer could instead trade the dollar value of burying the wires for an equal amount of affordable housing.

This brought a warning from CAO Jacques Dubé. If burying the electrical wires is too expensive then a commensurate cash payment elsewhere would likewise be too rich for the company’s blood.

“I think that would literally kill the project,” advised Dubé.

Maybe. But Willow Tree has proven exceptionally hard to kill.

Armco has put forward several designs for the site over the past four years to moderate success. Council first approved a 29-storey tower on the lot, against the recommendation of staff. Shortly after the last municipal election that design was pruned back to just 20 storeys in order to better fit planning principals written into the draft Centre Plan.

Then came the sudden bulletin from Armco that the company would need at least 25 storeys to make the project financially viable. Charitably, the developer was willing to trade 10 affordable housing units (maintained for 15 years) in exchange for the increased height.

Planning staff came back with a supplemental report containing several methods for installing a single-use density bonusing agreement. One of those scenarios used the formula contained in the Centre Plan to calculate Willow Tree would need 36 affordable housing units (or $3.27 million in public benefit) to earn the extra density.

As an alternative, councillor Cleary created his own impromptu formula by taking the 10 affordable units Armco wanted to offer and from that “reverse engineered” a public benefit of $900,000.

“If we were going to apply for a loan at a bank today, ‘Just trust me I can afford to drive a Mercedes. I make $150 million a year.’ Well, we would be thrown out.”

An exhausted Outhit said city council was being asked to “suck and blow at the same time here” by approving a proposal based on Armco’s business needs without any proof what the company says is true.

Armco representative Adam McLean told reporters after the meeting that Outhit is entitled to his opinion, even if he doesn't agree with the councillor's remarks.

“We sometimes hear staff say things to council we can’t correct,” McLean said. “This has been going on for four years and we’ve had 10 minutes to speak in front of council, so it is tough to get all the information back and forth.”

Chief administrative officer Jacques Dubé—the man who first brought forward Armco’s financial difficulties for council’s considerations—responded to Outhit’s concerns by stressing that a private company’s financial books should not be open to the public.

Dubé, legal director John Traves and planning staff immediately then went off for a closed-door meeting with McLean to suss out an amendment better tailored to Armco’s wishes.

The newly modified agreement that came back two hours later gives the developer several options on how to proceed: Armco can bury the lines and offer up 10 affordable units; not bury the wires and build 20 affordable units; build 10 units and pay HRM $900,000 in cash towards an affordable housing fund that doesn’t exist yet or just scrap the affordable units altogether and cut a cheque for $1.8 million.

“It’s good to have the flexibility,” said McLean. “That’s more recognizing that affordable housing right now is done through the province, so if there are any complications with trying to get an agreement done with the province on affordable housing, there’s still an option for the municipality to still get the value.”

Any affordable housing built into Willow Tree will depend on Armco signing some sort of official agreement with the provincial government. Given Nova Scotia’s track record with other housing projects, that's far from a guarantee.

The amended motion passed 13-3, with only councillors Smith, Sam Austin and Waye Mason voting against.

The second and potentially final public hearing on Willow Tree will take place at a future date, yet to be determined.
Prev
Next