Mayor says Maritime Football is in field goal range of securing a franchise. 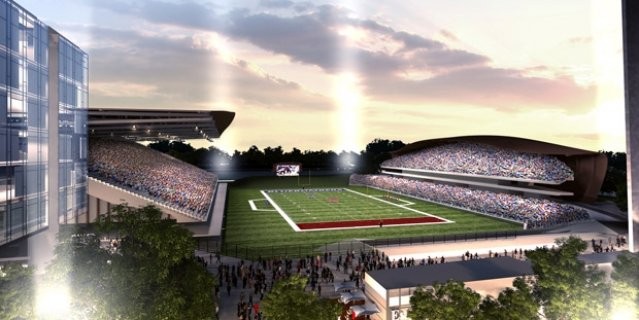 It's official. The municipality will once again tackle whether or not to build a stadium.

Councillor Steve Craig is asking for a staff report on the “opportunities and risks” involved with establishing a mixed-use development, CFL franchise and football stadium in Halifax.

The announcement came nearly 12 hours after met behind closed doors with Maritime Football Ltd. representatives Anthony LeBlanc and Gary Drummond about plans to bring a Canadian Football League team to the east coast.

Maritime Football apparently did not discuss any specific financial numbers for its plan, but Mike Savage says they've “certainly advanced the ball.”

“I think that they’re just outside field goal range,” Savage says of the group's chances for scoring a CFL team. “Second down.”

According to a report earlier in the day by TSN, republished by the CFL on its website, Maritime Football has reached an agreement for a “three-step process” to secure the Canadian Football League’s 10th franchise.

Any hope of that process reaching the end zone, however, will depend on securing both land and financing to build a new stadium.

A prior attempt to start up a CFL franchise on the east coast imploded back in 1984 when a stadium deal for the “Atlantic Schooners” couldn’t be reached.

Mayor Savage has long championed the stadium dream in HRM, even as staff have repeatedly shot down any business case for what would likely be a $200-million venue.

That hasn’t stopped Maritime Football from selling the idea. Owners LeBlanc, Drummond and Bruce Bowser have commissioned a third-party analysis of the benefits a stadium could bring to the city and province.

The group has also held in-depth discussions with both HRM and the province about its plans. All of those meetings have happened away from the public's eye.

On Tuesday, Tim Outhit made an attempt to bring this latest in-camera discussion into the light of day. The Bedford–Wentworth councillor pointed out there was no contract being negotiated during council’s secret “contract negotiation” agenda item and thus no reason not to talk about the proposal in public.

The plans presented last summer, for example, for the “pop-up” soccer stadium currently nearing completion on the Wanderer’s Grounds were openly debated at in front of residents and reporters.

Savage says there are still contract issues and real estate matters that have to be dealt with privately. But he did agree city hall is “at the point where this needs to come out.”

It’s heavily speculated Maritime Football will be pitching a financial model similar to the Lansdowne Park plan in Ottawa. Any upfront costs paid by the municipality will be recouped—or so everyone hopes—over the next couple of decades from increased tax assessments in the new commercial and residential developments built up alongside the stadium.

“Stadiums aren’t free,” says Savage. “The question is, is there a way the city can contribute to that without digging deep into capital.”

Speculative locations bandied about for the stadium have included everywhere from Shannon Park to Dartmouth Crossing and even the Halifax Common.

The mayor wouldn't comment on what property is being discussed. Council wants the best deal possible for Halifax residents, he says, but it’s not at a point yet to determine if that’s the case.