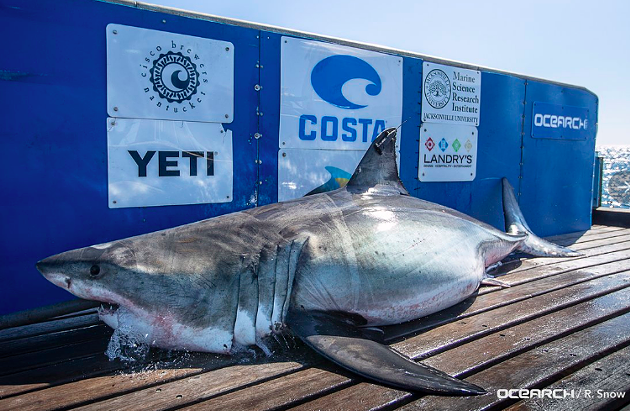 A Dalhousie University ocean research scientist says that the organization tagging and tracking sharks these past several weeks in Nova Scotian waters is posing a danger to both sharks and swimmers.

The American non-profit Ocearch has been on an expedition to study sharks off the coast of Nova Scotia since mid-September. The group finds and tags white sharks, ostensibly to track their migration and breeding habits.

But Aaron MacNeil, who holds the Canada Research Chair in fisheries ecology, says that Ocearch's mission seems to be less about scientific research and more about posting to Twitter.

“Basically, they have a thin veneer of science,” he says. “Like a candy shell of science.”

The organization throws bait and baited lines into the water to lure white sharks to the surface, then hooks and lifts the animal out of the water for tagging.

Since 2007, Ocearch has led 32 expeditions around the world, tagging some 330 animals.

The excursions offer plenty of dramatic photo opportunities that Ocearch happily shares on social media. Each animal is also named and assigned its own Twitter handle.

Fans of the tagged shark can then follow along in the animal’s ocean journey. Hilton, one of Ocearch’s most well-known celebrity sharks, currently has nearly 47,000 followers.

Ocearch says it facilitates scientific research. But MacNeil argues the group is “at the margins” of what other shark researchers investigate.

“I think they’re largely overselling the importance of the work they’re doing.”

Neither the Department of Fisheries and Oceans nor Dalhousie University’s Oceans Tracking Network is working with Ocearch on its expedition, he points out.

“If they were getting world-leading data, you’d expect those people to be working with them,” says MacNeil. “I mean, the fellow who founded it is a former reality TV host for a fishing program. So you can read into that what you like.”

Ocearch founder Chris Fischer and his team star in the History channel television series Shark Wranglers, which follows the organization’s vessel on tagging expeditions across the world.

During those travels, the non-profit has been barred from the waters around Massachusetts, Florida, northern California and from South Africa, where a bodyboarder was killed in 2012 by a shark only a week after Ocearch chummed nearby water.

“When I actually went and looked where they were tagging these things, I said, ‘Holy crap.”

Department of Fisheries and Oceans spokesperson Stephen Bornais says the DFO is “aware of recent concerns” about the use of chum to attract sharks and has advised Ocearch to alter course.

“While it is not anticipated that white sharks will change where they forage for food as a result of any chumming that occurs as part of this research, the department has advised Ocearch to move away from coastal areas frequented by recreational users.”

“Basically, they have a thin veneer of science. Like a candy shell of science.” tweet this
At more risk may be the sharks themselves. Past tagging efforts by Ocearch appear to have caused the death of a nine-foot female great white near South Africa, as documented on the organization’s reality show.

Ocearch claims that taking sharks out of the water via their modified crab boats is actually safer and less stressful than traditional tagging efforts.

“The shark’s eyes are covered with a towel and ocean water is fed down a tube so it can run through the gills,” Fischer tells Halifax Today. “Blood samples are taken right after the animal comes on board and again right before being released to test the shark’s stress level.”

But MacNeil argues the best thing for an ocean-dwelling animal is always leaving it in the water.

“You’re essentially beaching it temporarily, and a lot of marine animals are terrified about being beached because it crushes their organs and causes lots of problems.”

A Scientific American article from 2016 quotes Chris Lowe, director of the Shark Lab at California State University in Long Beach, as saying Ocearch’s tactics of catching and handling sharks also increases the likelihood that the animals will leave their habitat in response to the disturbance.

“Much less invasive procedures like external tagging that do not require capture should have less effect on subsequent behaviour,” states Lowe.

So cool! @OCEARCH has tagged the third white shark in Canadian waters. And... they named him it after the people of #Halifax! Be sure to follow @WhiteSharkHal to track his movements. https://t.co/wpDOLr5UcG


The DFO has issued Ocearch special permits to tag up to 20 white sharks off the coast of Nova Scotia and Newfoundland this fall.

So far, the group has tagged three males: Nova, named for Nova Scotia; Hal, named for Halifax; and Jefferson, named for one of Ocearch’s corporate sponsors, Jefferson Bourbon.

Other commercial partners of the American organization include a brewery, a sunglasses company and SeaWorld—itself a centre of controversy when it comes to animal welfare.

MacNeil does admit that Ocearch's sleek digital packages and media appearances are great for educating the public about the oceans. But it’s not doing much for science.

“They have left a trail of burned bridges behind them all over the world,” he says. “They’re coming in swaggering and they haven’t interacted very well with the science community here.”

“Holy smokes I finally made it to Newfoundland!” someone from Ocearch tweeted Friday while pretending to be a shark.

Information on white sharks in Atlantic Canada is limited and reporting is strongly encouraged by the DFO to increase knowledge about the species and inform its recovery. Anyone spotting a white shark in provincial waters can email Fisheries and Oceans at telephone 1-844-400-7870 or contact the DFO website.