City hall to pay for side guards on garbage trucks

Council agrees to spend $238,000 retrofitting the life-saving devices onto the privately owned fleet of vehicles. 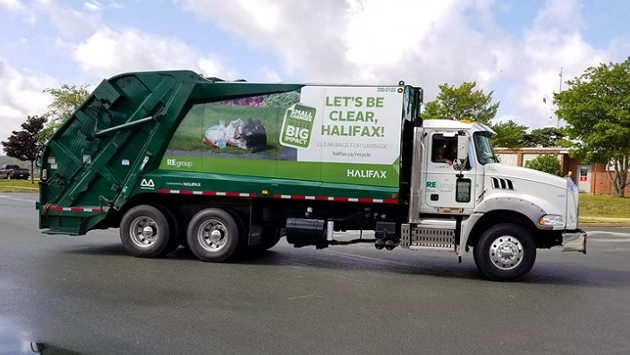 Halifax will spend nearly a quarter of a million dollars installing side guards on trucks owned and operated by private businesses.

Regional council voted on Tuesday to cover the costs for the life-saving devices on the 83 solid-waste collection trucks belonging to GFL Environmental and REgroup, respectively.

Last year, the city started requiring side guards on all contracted service providers' vehicles over 4,500 kilograms. Tuesday's motion, however, marks the first time city hall has agreed to pay for a private business to install the protective barriers—something that didn't sit well with some councillors.

“Here we have taxpayer money being spent on a private business and in two years time they could all leave and a new fleet come in,” said Halifax–Bedford Basin West councillor Russell Walker. “Are we going to do it again?”

In fact, we will. Halifax always pays for upgrades to its contractors' garbage trucks. Usually, that cost is just baked into the tender price though.

The question before council this week was whether to wait two years until the current waste collection contracts end—hoping no one is killed in the interim—or move up the timetable and pay out of pocket for the side guards today.

“Council’s going to end up paying for this, whether it’s part and parcel of the tender cost of paying for it separately,” said legal director John Traves.

Council eventually agreed to get the side guards on the road as soon as possible. Only Waverley–Fall River–Musquodoboit Valley councillor Steve  voted against the motion.

“I think it’s great HRM is forcing this to be an issue here in Nova Scotia,” said Halifax South Downtown councillor Waye Mason. “Like pesticides and compost, and our recycling program, this is an example of how HRM is leading the province and causing change.”

Side guards work as a barrier, positioned between a truck's front and rear axles, preventing cyclists and pedestrians from sliding underneath during a collision. Their implementation has been championed by researchers and cycling advocates as an effective way to save lives, but the cost has also been criticized by the trucking industry.

The Timberlea–Beechville–Clayton Park–Wedgewood representative noted that Tuesday's meeting began with a moment of silence for Cormier, the four-year-old girl run over and killed this past weekend in Yarmouth's Christmas parade.

It's unclear if side guards would have made any difference in that death, though it's known side guards could have prevented four fatal collisions with right-turning vehicles on HRM's streets over the past 11 years.

“We have these huge vehicles that need to have some sort of restraint from causing more carnage,” said Zurawski. “I can't put a cost on it. Someone's life. Someone's maiming, the hurt—we are an extended family. It affects us all when we hear of tragedies that happen.”

Side guards will be retrofitted on HRM's own fleet of vehicles as replacements are needed, with a total conversion expected by 2022.