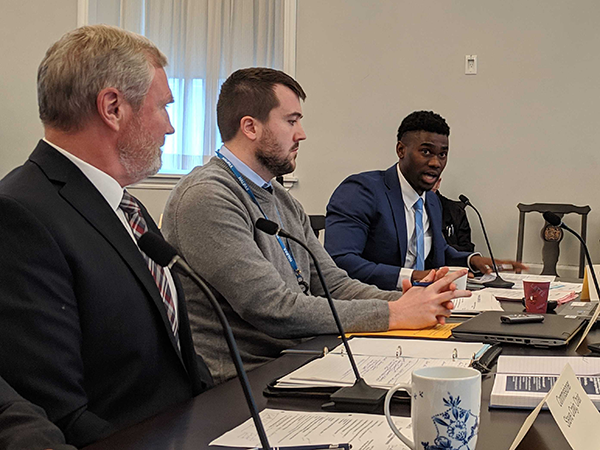 UPDATE: On Wednesday, April 17, justice minister Mark Furey directed police across NS to suspend street checks of both pedestrians and passengers in vehicles until further notice.

The Halifax Board of Police Commissioners put its weight behind ending the practice of street checks at this week’s meeting following Scot Wortley and the NS Human Rights Commission’s report released in March. Aware of its inability to mandate any operational changes, the commission made a point of officially recommending to suspend the practice.

Commissioner and District 8 Councillor Lindell Smith introduced the motion, saying if there are people who perceive that “our force, who swore to protect our residents,” is not there to keep them safe, says Smith “…we are not doing—as the commission—our justice as the oversight body.”

The report looked at 12 years of Halifax Regional Police street check data and found that Black men were nine times more likely to be stopped by HRP for a street check, followed by Arab men and Black women.

The report echoed what leaders from Halifax’s African Nova Scotian communities have been saying for years.

Wortley’s report, as District 15 Councillor and commissioner Steve Craig says, gave more than one option for going forward. Craig described the options presented in the report, saying “A. Ban street checks,” which received applause from the audience, or “keep street checks and regulate it so that there isn’t a violation of human rights,” which was met with “impossible” from members of the community attending the meeting.

Whether street checks are always a violation of human rights, and therefore illegal, was also debated at the meeting. The commission’s legal counsel Martin Ward explained that street checks on their own are not illegal, but when “the basis of you stopping that person and asking them questions is because of prohibited grounds under the human rights act, then that’s illegal.”

“When you target a specific group of people based on the colour of their skin and are allocating resources to monitoring and surveillance of group of people,” says commissioner Carlos Beals, manager with Ceasefire Halifax, “that is discriminatory and that’s illegal.”

For an official ban or end of the illegal-when-discriminatory practice, “the minister is the person who holds the hammer here,” says Ward, but the commission's recommendation sends a message to the TBD-chief of police and minister of justice Mark Furey.

“The way members of our community have been harmed through this process is appalling, abhorrent, and I can’t understand why we would perpetuate this kind of process,” says commissioner and vice-chair Carole McDougal.

“I think it’s a good place to start,” says Kate Macdonald, a community stakeholder on the Wortley Street Check committee and was at the meeting. “We’ve been having this conversation for decades and it feels like now things are starting to take a little bit of a turn for the better. So let’s keep this momentum going.”

Furey failed to take official stance on the issue before the closure of the legislature on Friday but maintained that street checks are a useful tool for policing.

Commissioner Natalie Borden says that the data on street checks being discriminatory is here, and data on the effective work of street checks as a policing tool, is not. Borden also warned that the problem is deeper than a moratorium or a ban on street checks. “We have an issue with how the police with the Black community,” says Borden. “And [I] would just caution people from thinking that once we ban street checks that all goes away.”

This increased street-check contact with Black Haligonians means “we are seeing more have criminal records due to interactions with our police force.” says Smith. Between 2006 and 2017 one third of the Black male population was charged with a criminal offence. Only 6.8  of white males were.

It's been almost three weeks since the report was released, and while the province and both the RCMP and HRP knew it was coming, they haven't rushed into any serious changes. RCMP inspector Robert Doyle and HRP Superintendent Don MacLean spoke to the board about what actions have been taken since the release of the report, Doyle noting that all staff had been encouraged to read up on policies, procedures and the report itself.

Superintendent MacLean says there was immediate direction "in terms of a reminder that any quota system was to cease—if it was in fact in place.”

He insists that “there’s never been an incentives program for street checks.”

However, whether or not street checks were used as a quota tool is unclear. Smith says he's "to many frontline officers, and every single one of them has said there have been quotas checks.”

This “huge gap” between police leadership and front-line officers needs to be addressed, says Smith. It’s a disconnect similar to the gap between responses from police officers in Wortley’s report and the unending echoes of unfair and discriminatory treatment by police from Black Haligonians.

The recommendations from the board will be delivered to Halifax Regional Police and the minister of justice.