UPDATE: Rugby gets kicked in the crotch by NS sports federation

In a surprise move, today the Nova Scotia School Athletic Federation cancelled rugby in high schools across the province.

UPDATE TWO, TUESDAY MAY 7: So. On Thursday the NSSAF canned rugby, then Friday the education minister made his statement demanding its return, and that seemed like the last word. But despite the minister’s convincingly stern tone, the NSSAF didn’t reverse its decision; at the start of the week rugby was still sidelined. Today, however, the game really is back on. Rugby Nova Scotia has agreed to manage the remainder of the high school rugby season, including regionals and provincials, with the support of the NSSAF. A joint statement, released after a meeting on Tuesday by the Nova Scotia education department and the NSSAF, says they decided to work together to find a plan for students to continue to play. The statement also mentions future plans for rugby: “Over the summer, NSSAF will work with the government, Rugby Nova Scotia, medical experts and others on safety in sport.”

UPDATE, FRIDAY MAY 3: The day after the Nova Scotia School Athletic Federation kicked rugby to the curb and it seemed like the game was lost, education minister Zach Churchill gave rugby a rousing half-time pep talk and sent it back out on the field to keep playing. In a statement, Churchill says the cancellation was done without proper consultation—and hints that it was made using bad data on injuries—therefore "I have called on NSSAF to reinstate rugby for all high schools immediately for the duration of the season." By the way, that petition is now approaching 25,000 names, with more still coming.

"All Rugby play within the NSSAF shall cease effective 12:00pm May 2, 2019." That's the thrust of a memo released today by the Nova Scotia School Athletic Federation, delivering a hard tackle to players in high schools across the province.

The memo spins rugby's cancellation as deliberate and carefully considered, a move that the NSSAF's board of governors chose to make "at their regularly scheduled spring meeting" after "a thorough review of incident report data" from an insurance provider.

However it's clearly a hasty decision, coming as a surprise not just to players and Rugby Nova Scotia, but to the NSSAF itself, where as of this writing the rugby provincial championships are still listed (along with table tennis, slo pitch and track and field provincials) on the federation's homepage under "Important Dates." According to CBC, a student in Cape Breton got injured during a rugby match yesterday. 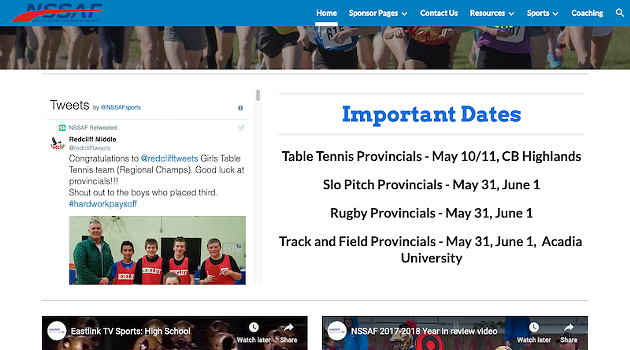 Rugby Nova Scotia, the sport's provincial governing body, was completely blindsided by the school sport federation. Jack Hanratty with RNS says they "were not previously aware of the announcement before its release and were shocked to find out." 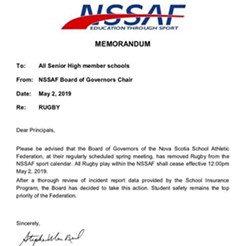 and living an active lifestyle." To the extent that injuries motivated the NSSAF's decision, Hanratty points out "you can get injured in any sports," and he doesn't see why rugby should be singled out. RNS has requested a meeting with the NSSAF to find out the process behind the cancellation, and see what can be done to reinstate the sport.

A change.org petition to "Bring Rugby back to NS schools" was created shortly after 2pm. Five hours later, there were over 5,000 signatures.