The National Citizens Alliance of Canada returned to Halifax as part of a pre-election tour Thursday September 12 at Cornwallis Park. NCA leader Stephen Garvey is running for MP in the Cumberland-Colchester riding in Nova Scotia.

Close to 100 counter-demonstrators organized by Halifax Against Hate showed up early to disrupt the event. More than a dozen police arrived with two police vechiles and eventually brought a barricade to separate the NCA leader from chanting counter-demonstrators with noisemakers, bubble blowers, snacks, pamphlets and signs.

Garvey said the chosen location was symbolic to him. “This is where the Cornwallis statue has been removed,” he said. “Let’s get that statue back up.” Otherwise, Garvey didn’t mention the statue in his election platform or make any promise to return it, if elected. 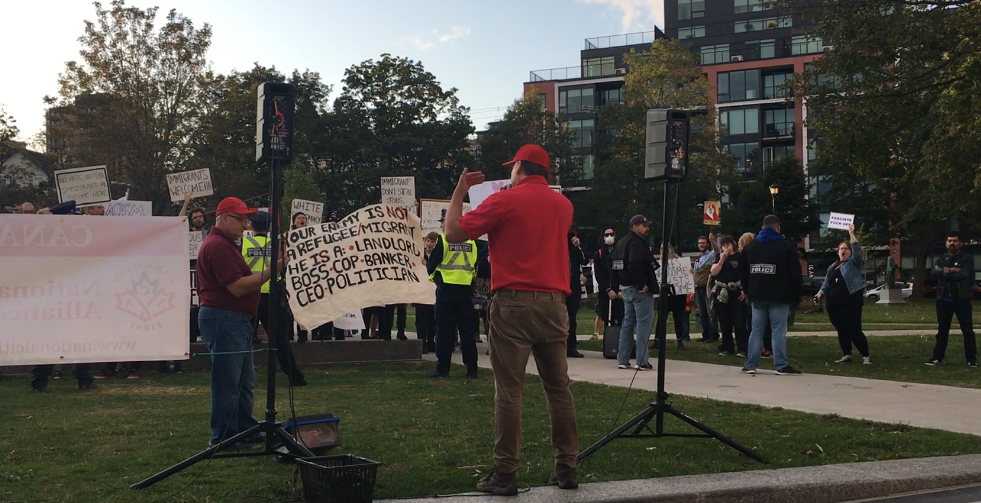 Garvey said his party supports “all Canadians” as long as they’re not refugees or new immigrants.

Garvey said the counter-demo was “ridiculous,” “unnecessary” and “nonsense” but at the same time, he respects their right to protest.

During his campaign tour Garvey made headlines for harassing politician Gurratan Singh, brother to NDP Leader Jagmeet Singh, at MuslimFest in Toronto last week. Singh was applauded for withstanding the anti-Mulsim attack even though he himself is not Muslim. The NCA was also met by counter-demonstrators in Charlottetown on Wednesday.

Laura Krabappel says she went to the counter-demo to make it clear that hate speech isn’t welcome in Halifax.

Krabappel says in her view, the NCA platform is violent. If enacted, their policies would target ethnic minorities and immigrants. “If you get down to it, they want to directly harm people. They want to legislate violence against these certain groups of people,” meaning Muslims, 2SLGBTQ and non-white immigrants. “Is this free speech or is it hate speech?”

Khadija Abawajy was on her way back from celebrating her birthday with friends when they passed through Cornwallis Park.


“I have always felt safe here in Halifax as a Muslim,” she says but “walking by the NCA protest made me feel unsafe.”


Abawajy was born and raised in Halifax but when she realized what was going on she was suddenly terrified. “The fact that this group is in Halifax, walking amongst people, trying to further their political agenda is scary,” she says.

NCA has tried recruiting in Nova Scotia several times but has been banned, booed, denounced or escorted off the premises each time. The group was banned from the Apple Blossom Festival in Annapolis Valley last year. In June they were met with about 100 counter-demonstrators at Grande Parade Square in Halifax, where pepper spray was deployed and one was arrested. On the same day the town of Truro–which is in Garvey’s own electoral riding–publically denounced the NCA party.


A list of platform positions are detailed in a comparative breakdown Garvey posted on social media. NCA proposes an immediate moratorium on all immigration into Canada, severe limits on global trade, a full recall of current MPs, 10 amendments to the Charter of Rights, a reduction in foreign aid by a whopping 75 percent and a declaration that climate change is a hoax.


———
This story was updated on September 17 to include Khadija Abawajy's experience.
Prev
Next