Demanding the government close the Alton Natural Gas Storage project, shut down Boat Harbour project and close all coal, gas, and biomass generators in the province. 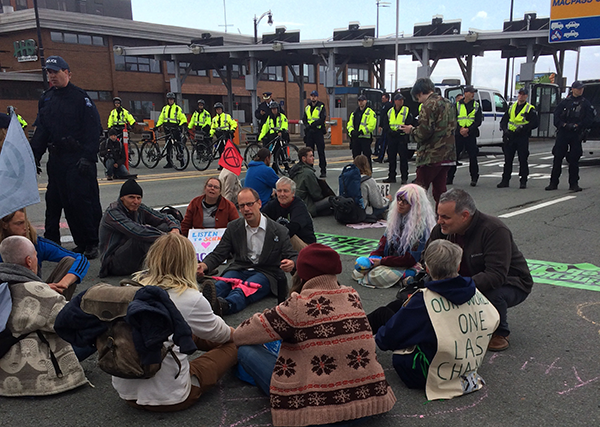 Nearly 100 protestors from across the province descended upon the Angus L. Macdonald bridge early Monday morning to demand action addressing the climate crisis.

The #BridgeOut demonstration, organized by climate justice activists from Extinction Rebellion Nova Scotia had demands for government to close the Alton Natural Gas Storage Project by October 4 (they didn’t), enforce the early 2020 deadline for the Northern Pulp Boat Harbour project and to close all coal, gas and biomass generators in the province and replace them with renewable energy from solar and wind.

Protesters arrived at the Bridge just after 7:30 am, and were met by more than 50 Halifax Regional Police officers at the bridge.

More than a dozen high school students skipped class to support the protestors,  including Lachlan Brown from Dartmouth High School.

“I’m worried about our planet and I’m worried I’m going to get robbed of my future if we don’t cut carbon emissions,” says Brown.

“I’m here to learn. The people older than me know more than me. It’s up to me and up to my peers in 20 years when we’re leaders of this country and we’re responsible for this planet so we have to fix this and the best way to do that is learn from the people who already know.”

While Extinction Rebellion planned to keep pedestrian and cyclist lanes open to the public, the Bridge Commission closed all lanes of traffic with an exception for emergency vehicles only.

Catherine Hughes, an artist from River John, says she rode her bike approximately 150 kilometres to Dartmouth, a nearly four-hour ride, to avoid creating additional emissions travelling to and from the demonstration. Hughes emphasized the need for expanded, accessible public transit throughout the province, “so people don’t have to feel like they’re taking their lives in their hands so they can live in a way that’s consistent with their beliefs.”

“The Pictou Landing First Nation…have to live with the stench from [the Northern Pulp] mill all the time, and in particular, they need to live beside Boat Harbour and the contamination there,” says Hughes. “I really want to see that mill closed down. It’s doing much, much more harm than good.”

After being told to leave the premises and given time to do so at 10:50am, Halifax Regional Police arrested around 14 people for failing to leave. By noon, a total of 18 activists had been arrested. A tweet from Extinction Rebellion NS late Monday afternoon noted the oldest detainee was born in 1942, and the youngest in 1997.

Supporters with posters and flags were ordered by police to leave the sidewalks near the bridge following the arrests as police reminded attendees the sidewalk is private property owned by the bridge.

The bridge re-opened by 12:15 pm to cars and buses, as well as cyclists and pedestrians.

The sentiment of the closure contrasted with the Climate Strike last month that saw more than 10,000 protestors take to the streets of Halifax.

There was plenty of criticism for the demonstration from citizens frustrated by having to take an alternative route or method of transportation, making #BridgeOut an example of protest in its purest form—not for smiles and photo-ops but people putting themselves on the line for our planet. And despite the uproar from the public, the demonstration has given attention to the climate crisis and Extinction Rebellion’s demands in a larger capacity than ever in Halifax and around the world, where similar disturbance protests unfolded over the course of the day. 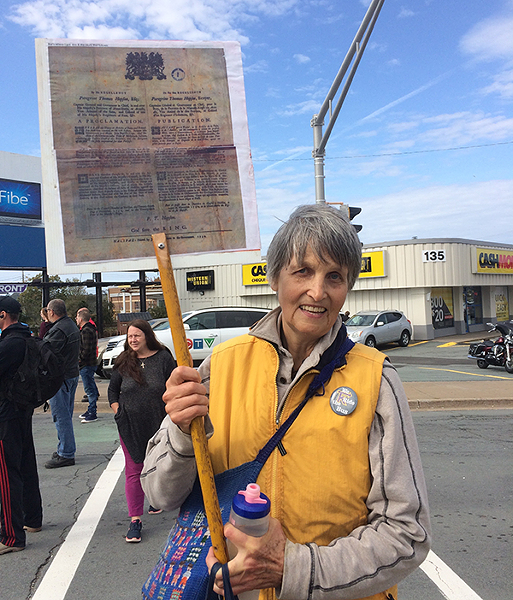 Many citizens were more concerned about short-term inconveniences rather than long-term consequences of our actions—despite drivers being well accustomed to detour routes used during the abundance of closures during the Big Lift in the past few years.

But for protesters, it was a now-or-never moment. “I’m worried about the future of the world and all the good people that live here,” says Frances Van der Wel from Wolfville. “It’s just time. I’m fed up, I’m really fed up. Something has to change.”