Elections Canada is on site at Dalhousie, SMU and University of King's College 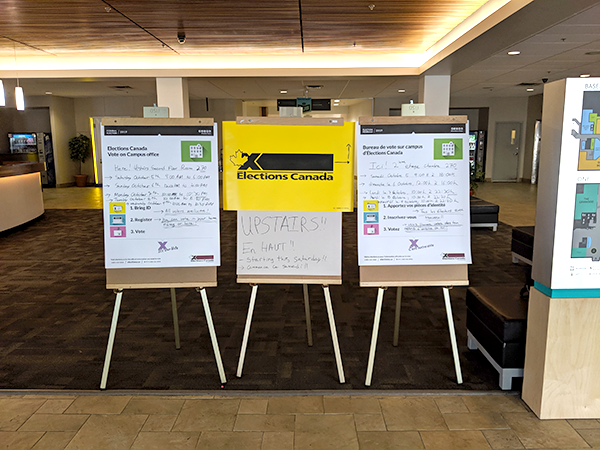 Voting has historically been inaccessible for students and youth living away from the electoral riding they consider home, but this year, students can vote on campus with special ballots.

In past federal elections, there’s been a low voter turnout for youth aged 18-24. In 2011, overall voter turnout was 61 percent but less than 40 percent of youth voted.

“I always thought that my vote didn’t really matter and that’s why I didn’t vote in the 2011 election,” says Al Schnare.

At the time Schnare was living in Cape Breton, away from his home in Deep Cove. He says that he wouldn’t have voted anyway because he felt fed up with the political system and candidate options during the 2011 election.

In the 2011 federal election, Elections Canada set up polling stations in some university residences, but they were only to serve those living in residence. Many of these voting stations went unused because students were already transitioning between school year and summer lodgings by election day in May that year.

With growing concern about the low youth engagement in elections, the vote on campus program was started in an attempt to make voting easier and more accessible. The program allows people to vote by special ballot for a candidate in whichever riding they consider to be home—so long as they arrive with a form of accepted identification.

In 2015, 39 educational institutions took part in the program.

Youth turnout jumped by 18 percent for the 2015 federal election, pushing the youth turnout up from less than 40 percent in the previous election, to 57 percent.

“There was no question after the election whether or not it would be continued,” says Lisa Drouillard, director of outreach and stakeholder engagement for Elections Canada.

While Drouillard says programs like Vote On Campus can’t take all the credit for the spike in youth turnout, they were pleased to be able to accommodate the uptick in youth voters.

“The older I get, the more mature I get,” says Schnare, who voted for the first time in 2015, “and I realize that it [voting] is a lot more important than I gave it credit for before.

Voting on campus by special ballot in the advance polls runs from October 5-9. Students looking to vote in their home riding after October 9 can do so at an Elections Canada office or by mail before 6pm on October 15.