Says he's giving such lengthy notice so others have time to plan to vy for his seat. 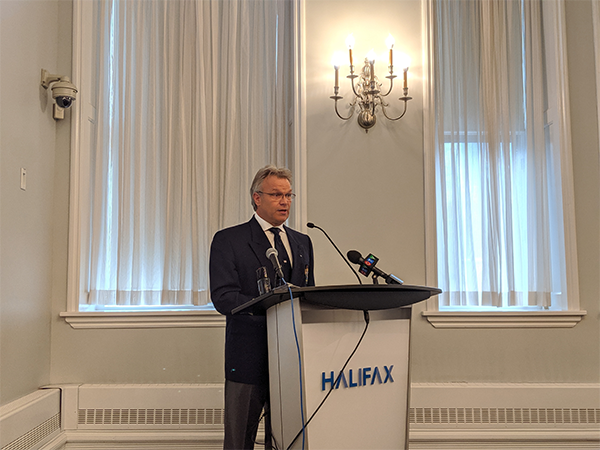 With plenty of deep breaths and a few sideways smiles, Stephen Adams made it through his announcement with almost no tears in City Hall Friday morning.
Adams, Halifax's longest-serving councillor, told colleagues and media that this year would be his last in politics.

Adams, says he chose to make this announcement now in order to give anyone in his district—Spryfield - Sambro Loop - Prospect Road—sufficient time to plan to run in next year's municipal election, which will take place on October 17, 2020.

"For the individuals that are interested in offering, a year will give them some time to learn the area, learn the issues, and more importantly, get to know the people involved," says Adams.

He adds that potential candidates should "Ask questions. Don't be afraid to ask me questions, read the papers and don't pay attention to Facebook."

While other 2020 hopefuls have also made quasi-moves surrounding the upcoming municipal election, official operations can't kick off until March 1. Which means candidates can't raise or spend campaign money until then.

Adams joined city council in 1991, was around for amalgamation in 1996, and has been around for plenty of changes since then—not to mention four different mayors, seven premiers, eight MPs and eight city managers or CAOs. He says he'll miss the ups, and the downs—because they made the ups better.

"Have a look at Spryfield now," says Adams of his career. "With the help of a lot of people and some determination and stubbornness, if you will, we succeeded."
Adams looks forward to seeing the 500 block section of Herring Cove Road project take shape during his last year on council, citing the bike lanes, sidewalks and a retaining wall which has already been started coming to the area.