Ahead of premier's decision on Boat Harbour, Unifor members rallied for jobs

Upholding the Boat Harbour Act means Northern Pulp will run out of time—and have to shut down. 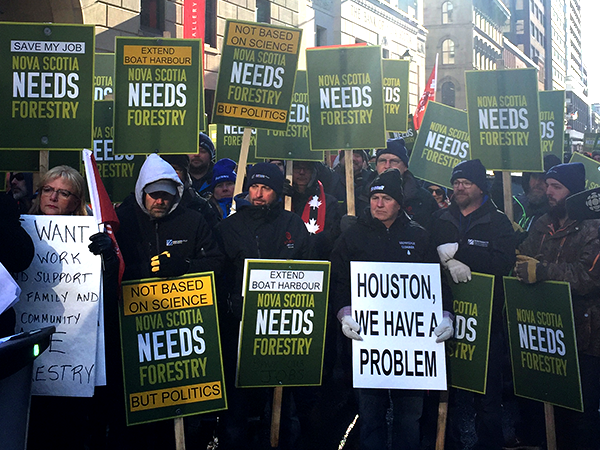 Hundreds of Unifor protestors gathered outside of the Halifax Legislature Building on Thursday, rallying for an extension for the closure of the Northern Pulp mill from Premier Stephen McNeil.


Premier McNeil announced Friday that there would be no extension, and the Boat Harbour Act—which called for the closure of the effluent treatment facility that poured toxic waste into Boat Harbour—would move forward as legislated.


Scott Doherty, Executive Assistant to the President of Unifor, began speeches by saying, “Our message today to the Premier is to extend the Boat Harbour Act and save at least 11,000 jobs.”

There are over 300 employees at at Northern Pulp. The other jobs Doherty is including consider a spinoff of the decision–the loss of truck driving and transport jobs, among others.


The messages of the six speakers centered strongly around three primary arguments: That the initial construction of Boat Harbor was unethical, that the Boat Harbour pulp mill should be closed, and that it should be closed in a manner that maintains forestry jobs according to a realistic timeline.


“Do not make another mistake," said MacNeil, "We can support good jobs, protect the environment, and respect First Nations. And that, Mr. Premier, is what we need to do."


Sawmills across the province ceased work today in solidarity with Unifor workers. Richard Freeman, a part-owner of Freeman Lumber c. 1832, stated in his speech, “I see a lot of signs around that say ‘Houston, We Have a Problem,’ but who is at mission control, folks? Nobody is at mission control.”


This week, all parties were anxiously awaiting a decision from the Premier. These parties include Northern Pulp, the fisheries industry, Mi’kmaq communities, and Friends of Northumblerand Strait that have been involved in this contentious saga for decades.


Friends of the Northumberland Strait are gathering Friday in Pictou, calling for promise to the community with the Boat Harbour Act to be honoured, urging Premier McNeil to respect the initial January 31st closure date.