Nova Scotia will uphold its promise to Boat Harbour 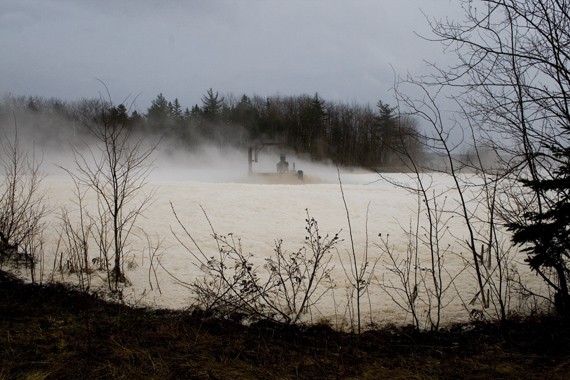 Premier Stephen McNeil will enforce the Boat Harbour Act, which says as of January 31, 2020 the waters of Boat Harbour can no longer be used as a place to dump waste effluent. By standing behind the 2015 law, McNeil keeps his promise to the Mi’kmaq people of Pictou Landing First Nation and seals the fate of the Northern Pulp mill, the heart of Nova Scotia’s forestry industry.

The premier’s decision has been hotly anticipated for three days, during which time he said he was putting together a $50 million plan to bail out the workers who will be affected when the Abercrombie, NS mill closes—now an inevitability.

McNeil’s environment minister, Gordon Wilson, announced Tuesday the mill could not start building a new effluent treatment facility and pipeline into the Northumberland Strait, because its proposal for a replacement to Boat Harbour hadn’t met the province’s standards for environmental protection.

For the mill to keep operating, the premier would have had to extend the legislated closure date for the mill’s current effluent treatment facility.

For more than five decades, the mill has emptied industrial wastewater into Boat Harbour, a former tidal estuary that is now a polluted lagoon. The people of Pictou Landing First Nation—whose land is adjacent to, and used to encompass Boat Harbour—have long decried the mill’s use of the lagoon and have been counting down the days until its closure.

Previous governments have promised to close Boat Harbour but none have followed through, which McNeil said factored into his decision.

But he had to weigh his commitment to Pictou Landing against the economic fall-out of losing the mill. Mill executives have said Northern Pulp supports 2,700 full-time jobs, including woodlot owners who sent the bulk of their chips to the mill, and truckers who transport the materials around and out of the province.

To ease the transition away from Northern Pulp, McNeil said his government will put $50 million toward emergency relief, retraining and education.

McNeil’s decision was one of the biggest of his political career and will undoubtedly shape his legacy. He blamed the mill for putting the province in a difficult situation.

“Northern Pulp has had a number of chances to get this right and yet here we are,” he said at a press conference Friday morning.

McNeil welcomed the mill to stay in Nova Scotia if it could modernize its operations and meet the government’s environmental regulations.

“It is now up to them. They’ve had five years to do the right thing and I was hoping it wouldn’t come to this. I am disappointed, to say the least.”

The CEO of Paper Excellence, Northern Pulp’s parent company, disputed the premier’s comments, saying the province hadn’t given the mill a “definitive process” for environmental assessment of its proposed replacement to Boat Harbour.

“Northern Pulp put forward an excellent plan,” said CEO Brian Baarda in a statement, “informed by third party, subject matter experts, based on sound science that showed no meaningful environmental impact, represented a significant operational improvement, and ensured Nova Scotia’s forest sector and the thousands its employs could remain a vital part of our economy.

“It also enabled timely closure and remediation of Boat Harbour. The Premier chose to disregard these facts.”

Baarda said the mill plans to start cancelling contracts and issuing lay-off notices to its employees.