A determined group of Nova Scotians gathered yesterday at Grand Parade Square to protest the sale of Owls Head, a planned provincial park that was recently de-listed by the provincial government. Despite cold temperatures, approximately 120 people were in attendance, wearing hats and mittens, chanting “Stop the sale, save Owls Head.”

Owls Head is a property on the Eastern Shore, near Ship Harbour, that was included in the government's Our Parks and Protected Areas Plan in 2013 and known to locals for decades as “Owls Head Provincial Park.” 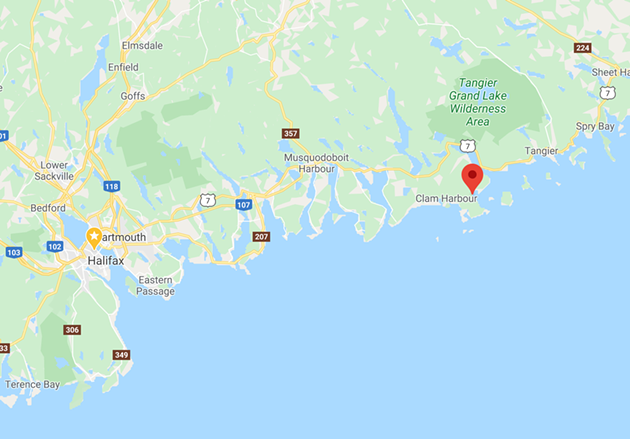 Unknown to the public, the provincial government agreed to sell the land to a private developer with plans to build three golf courses on the property. It was only after CBC broke the story a few weeks ago, on December 18, that citizens became aware of what was happening. And they became angry.

“The government wasn’t going to tell us,” said Chris Trider, one of the main organizers of yesterday's rally, addressing the crowd. “They were doing it in secret. No denials. No apologies. No remorse.” Trider is a former provincial park planner, and he said this is the worst he’s ever seen when it comes to secrecy and deceit within the government. He says he just couldn’t sit by and watch.

“We’re taking the government to task,” he told the crowd, “because this is our property, this is our environment, this our legacy for our children. And it’s not theirs to sell!”

Although many protesters are opposed to the idea of golf courses replacing an ecologically sensitive and unique area, the anger is mostly directed at the “government that conducts business in secrecy, and that makes vital land decisions without consultation,” said Pam Baker, a resident of the area near Owls Head, who also spoke at the gathering.

Baker said that not much has changed on the Eastern Shore in the last 30 years, and that jobs are needed. “Development would be welcome. But none of it should come at the expense of a rare ecosystem,” she said. “And with apologies to Joni Mitchell, let’s not pave paradise and put up a parking lot,” she added, to cheers from the crowd.

This week the developer published a letter via his lawyer that his plans for the golf course are on hold, CBC reported. Though Chris Trider said he thinks it doesn’t really change much, and that “on hold” could mean anything.

Trider also pointed out Owls Head is one of 197 other properties in the province that have the same status—“Provincial Park Reserve”—awaiting legal designation, and that if the sale of Owls Head were to proceed, it would set a dangerous precedent for those other properties. “Protected should mean protected,” he said.

The group marched from Grand Parade to the legislature building, where provincial opposition leaders and local community leaders took to the microphone to share their concern or voice their support. Green Party Leader Thomas Trappenberg assured the protesters, “we will get Owls Head back.”

NDP party leader Gary Burrill said his party would be introducing legislation that would make it illegal to de-list a provincial park behind closed doors in the future. “We’re going to call this legislation...the Owls Head Act,” he said. PC Leader Tim Houston said he hasn’t seen the proposed legislation yet but his party would have a look at it, and that his party would continue to listen to the concerns voiced by citizens.