The group is rallying to get the provincial government to look into the unexplained actions of NSCAD’s board of governors. 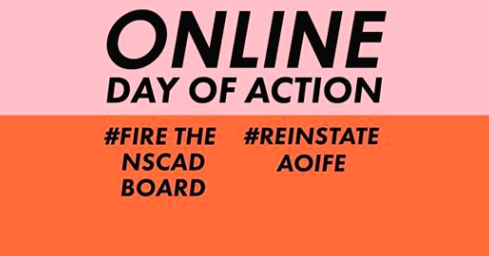 The Friends of NSCAD group is protesting online today to request that the NSCAD board of governors be fired—and that recently deposed Aoife Mac Namara be reinstated as the president of the institution.


The event, Online Day of Action To Fire The NSCAD Board, comes after the Friends’ petition to oust the current board and reinstate Mac Namara reached over 4,000 signatures. (To catch you up: On June 26, the board dismissed Mac Namara as president—and is yet to give an explanation why.)


Brody Weaver, a member of Friends of NSCAD, says the rally is to ensure that the issue keeps getting attention and keeps applying pressure: “Specifically the board’s employers, to potentially ask them to resign,” they say.


The rally was originally planned as a gathering at the NSCAD Fountain Campus and a short march. However, as a post at FON’s Facebook page says, due to the “extreme heat warning, we have decided to postpone the physical rally and focus on online actions. ”


Instead, FON has created an online action plan, dubbed "six acts of resistance in 60 minutes." The schedule of online happenings includes things like sending emails to the premier and to ministers, asking for an investigation into the board’s behaviour and for Mac Namara to be reinstated; posting photos online and tagging Friends of NSCAD; and, as FON puts it, "calling the Department of Labour and Advanced Education to request a meeting with the minister concerning NSCAD’s crisis."

FON members hope these actions will at least convince the board to explain the decisions behind Mac Namara's dismissal. Weaver says if after the protest the members of the board don’t resign, they hope the provincial ministers interfere with the issue at hand: “And kind of hold at least the governors in council that they have elected, accountable.”