She forgot the tripod, but they still got the perfect picture. 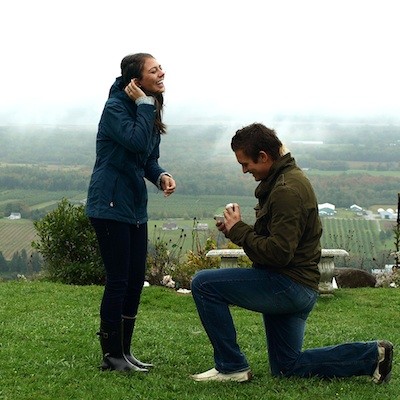 In November 2009 Brock asked me out on our first date. We went to Rainbow Haven, where he made an impressive bonfire and we laughed hysterically all night. A couple of months later, on New years Eve, he asked me to be his girlfriend while confetti and balloons fell from the ceiling at exactly midnight. Such a heart-warmer he is. Fast forward almost two years of attending different universities, working multiple (four) jobs to pay for it, so many laughs, millions of pictures, him opening every door for me, buying a goat and pug together, rarely missing Sunday church or a football game together and it brings us to October 2011.

It had been raining for a week straight and wasn't showing any signs of stopping, when Brock asked if on Sunday we could go to the Look Off in the Annapolis Valley and take pictures. Of course we went, rain boots and sandwich bag shelter for the camera. Half way to our destination he realized I had forgotten the tripod for the camera at home, I replied "It's okay, it's not as if we're going to look back on today and say 'Jeepers, remember that day you forgot the tripod?' we'll be fine..." Yeah, I haven't lived that down yet. We arrived at the Look Off, where you can see the entire valley, it was beautiful. We took a couple crooked self-timer pictures in the pouring rain and laughed the whole time. Finally, in our last picture, he dropped to one knee and proposed. The picture is a perfect way to relive the moment I said yes.

*As told by Chelsey Lightfoot.