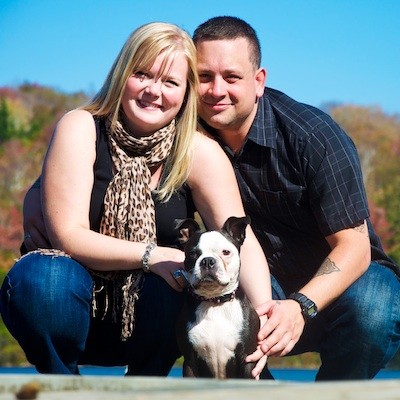 After both of us coming out of bad relationships and moving to Nova Scotia, we found each other. Originally from New Brunswick, I (Andrea) was living in Northwestern Ontario when I got an opportunity to move to the South Shore of Nova Scotia for work... I leapt at the chance and packed up my dog and arrived in July 2010. Mike, originally from BC but living in New Brunswick working for the Canadian Air Force, was posted to Halifax to work for the navy and he arrived in July 2010.

After settling in we both realized something was missing... and signed up for an online dating website. I was the one to make first contact, it was a Thursday we chatted back and forth before he admitted he didn't like to chat and would I be open to him calling me. We talked on the phone for an hour. Friday evening came along, and we talked on the phone again for hours, we then made a plan to meet on Sunday. Mike drove down to Lunenburg on his motorcycle, and we met on the waterfront. Our first date was perfect! We toured the Fisheries Museum, had lunch in Mahone Bay,and ended up at Cresent Beach were we just walked along the beach and talked about everything. There were even two horses that were on the beach that day... just like a fairytale! I joked with him when I was getting on his motorcycle before he rode off into the sunset, I have a friend waiting for me to call her when I got home, and if I didn't call then she was calling the police! Our first date ended with plans to meet up the next weekend.

The second date was just as memorable as the first. Mike bought my dog a treat as an offer of good faith... Marley (the dog) woofed down the treat, and then was sick all over the floor! After he was calm about that happening I knew he was a keeper. Our first few months were hard with Mike away a lot with work. But in December of 2011 he told me he wanted to show me something that he picked up when he was away... he got something out of the drawer and then got down on his knee and told me that he loved me and wanted to spend the rest of his life with me... I said yes!

We are getting Married June 23, 2012 at the Fisheries Museum in Lunenburg where we had our first date.

*As told by Andrea James.