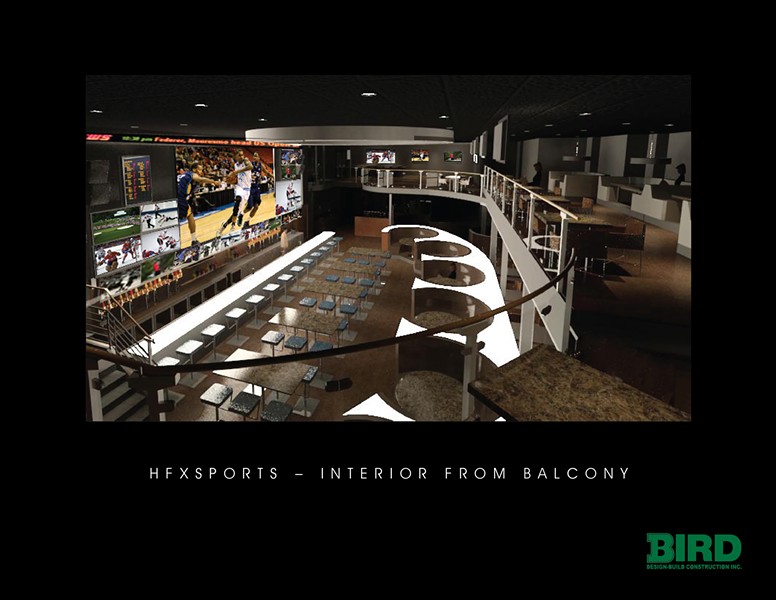 Now that hearts have healed from the loss of longtime nightclub The Palace (1721 Brunswick Street), brotherly business partners Michel and Marcel Khoury are ready to reveal what’s been a two million dollar secret. That’d be HFX Sports Bar & Grill, the mammoth sports bar/lounge/restaurant hybrid that’ll move in to the downtown space this fall.

“We noticed that the business has changed quite a bit from the old days,” says Marcel Khoury, who’s family has ran the former Palace and The Alehouse since 1987. “Not as many students coming out, numbers heading downtown not the same. Trends, demographics and even habits have changed.”

The inconsistency of the Palace’s crowd was its demise in the end, forcing it to close suddenly in April. “We want to be in this for the long haul,” says Marcel. “It’s the business we know. We want a seven-nights-a-week business, like The Alehouse.”

And that’s why they’ve invested that two million in HFX Sports Bar & Grill, a bright new space inspired by the place the Khoury brothers have seen in their travels, and their own vision—a softened version of the typical sports bar.

“We’re blessed to have in this location,” says Marcel of the 11,000 square foot space that neighbours the Metro Centre, home of the Halifax Mooseheads and Rainmen. The bar’s main feature will be a wall of in 16 LED panels, flanked by even more LED screens, for maximum sport enjoying. And you’ll barely have the opportunity to miss a point with 90-plus other screens throughout the venue, bathrooms, stairwells and booths included. A curtain wall will also be installed along the Brunswick Street wall, lighting up the long-time dark room and giving patrons a view of the busy stretch below.

While the emphasis is definitely on the sports fans, the Khourys want HFX Sports’ comfortable, welcoming space to appeal to a wider crowd—from families to after-work wine— with its glitzier lounge vibe, upscale but mid-priced pub food, a private lounge for rent and an attached sports apparel shop.

Marcel Khoury says he's not trying to compete with the city's other popular sports pubs, which is why he and his brother have aimed to make HFX Sports something the city hasn't seen.

"A vibrant city needs a vibrant downtown," he says, with high hopes for October for an opening date.