A fight is brewing

Just as the chocolate-induced Easter acne begins to appear, here we are to worsen it with the remaining eight competitors of this sweet and salty tournament. The bests of the bracket are in battle mode all week, and by Friday we'll have a March Madness 2015 champion. Who deserves the crown—Ginger Beer, Root Beer, Dr. Pepper or Cream Soda? Or will it be Doritos, Crunchy Cheetos, Cheese Puffs or Party Mix. Two lessons we've learned thus far—fake cheese flavour kicks ass when it comes to chips, and guts win over glory in this junk competition.

Look at this beautiful thing! 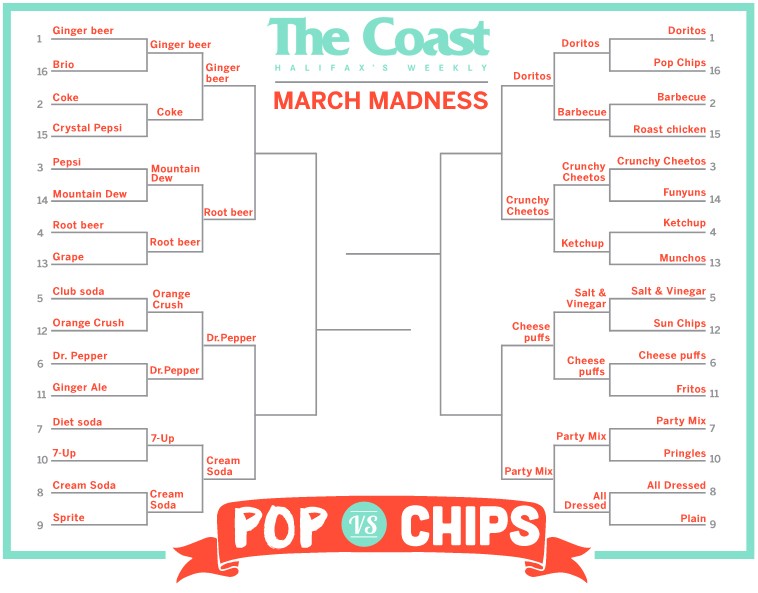 Day 12's match ups had the entire weekend to air out their differences and we still wound up with a tie. Eighth seed Cream Soda and 10th ranked 7-up still sit at 18-18 as I type these words, and as my fellow sportscaster says tie=ladies' choice and this lady is all about the Cream Soda, so that settles that. In chips, literal mixed bag Party Mix, a seventh place chip, beat mixed flavour All Dressed by a cool 21-16. Are you snacked out yet? We hope not.

Today brings us to the old timey Pop Shoppe, with classic concoctions Ginger Beer (the spicy wonder and our number one ranked drank) and fourth place sweetie Root Beer facing off. These beers both rule, but which makes the best use of plant bits? Which would you rather crush a two-four of?

Things are leaning cheesy in the first round of chips final four, with top seed Doritos taking on number three Crunchy Cheetos. Let's get real for a second here, some of the Doritos family (say Zesty, or Nacho) actually taste a hell of a lot like a Cheeto. The flavour powder is probably the same. So, unless you're voting based solely on the magic that is Cool Ranch, or Sweet Chili Heat, this is a texture contest. Thin, triangular flavour bursts, or dense little cheese sticks. I'm all in for a Cheeto champ. Go ahead, hate on me for it, I can't hear you over my crunching anyhow.