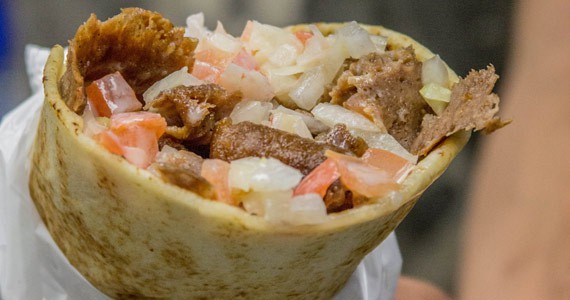 It doesn’t matter if you’ve lived here your whole life or are just visiting for the day; eating a donair is a painfully Haligonian experience. Now, one councillor wants to make the city’s relationship with the heavily-sauced snack official.

“The Donair was invented in Halifax Regional Municipality and we need to make this official,” she writes.

A staple in every local pizza shop throughout the Maritimes, the humble donair has apparently also conquered Alberta. This past summer Edmonton was caught in a firestorm of debate about whether the green onion cake or the donair should become that city’s official food. “Local woman” Salma Kaida started a petition in favour of the cakes, telling the Edmonton Examiner that Halifax had already claimed the donair. But we haven’t, hence this new motion.

It’s unclear what becoming a city’s official food would actually entail, but Tuesday’s item would at the very least stop some other prairie town from swooping in and stealing our thunder.

“I know probably better than anyone else the amount of publicity you get out of a donair,” says Norman Nahas, owner of King of Donair. “It’s really a big thing for Halifax to be able to say donairs were born here. You can’t really replicate the taste anywhere else.”

On Oct 20, Halifax Council will debate to make the DONAIR THE OFFICIAL FOOD OF HALIFAX! In http://t.co/Vwzi1tvJXS pic.twitter.com/wsABdkHTUn

The donair is to this city what the banh mi is to Saigon, writes Simon Thibault in the Globe and Mail, one of several donair endorsements Mosher cites in her agenda item. The item has also been lauded (or at least acknowledged) by Anthony Bourdain, The Food Network, Classified and just about every local media outlet a couple dozen times over.

Mosher’s agenda item claims the donair was created at the original Quinpool Road location of King of Donair in 1973. Other reports have it originating from Peter Gamoulakos and brother John Kamoulakos (yes, they spell it differently) at their Bedford Highway Velos pizza restaurant a few years earlier, in 1967. Nahas, who claims he heard this story directly from Peter’s son, says Gamoulakos standardized what we now think of as a Halifax donair when he opened the first KOD.

The origin story isn’t helped by the entangled pizzeria history of Halifax’s Greek and Lebanese communities. See if you can follow along; Nick Garonis purchases King of Donair from Peter Gamoulakos in the 1980s. He eventually opens a second franchise at Grafton and Blowers Street in what soon becomes Pizza Corner. That KOD was bracketed by Sicilian Pizza on one corner (owned by Marwen Nahas), and The European Food Shop on the other (owned by John Kamoulakos, Peter’s brother).

King of Donair as a corporate entity is then sold to Sam Nahas in the 1990s, who passes it down to his son, Norman. The European Food Shop closes this past April, soon replaced with Johnny K’s donairs. Johnny K’s is named for Kamoulakos, but owned and operated by Peter and Tony Nahas, who are a distinct third donair-making Nahas clan.

It’s a remarkably intertwined, Haligonian history for a dish that’s now served up by every pizza restaurant in the Maritimes.