Craft beer and cheap eats from PEI arrive this summer 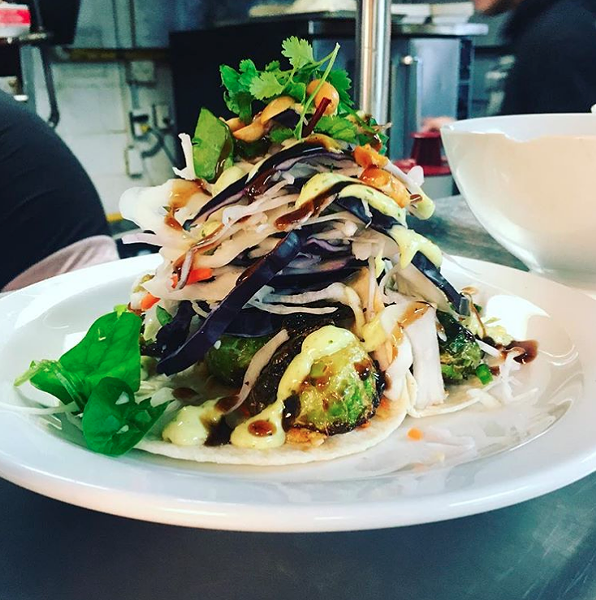 Charlottetown’s HopYard Beer Bar is heading off the Island. The popular pub will open its first Nova Scotia location at 2103 Gottingen Street (the former Johanna B. Oosterveld Centre) sometime this summer, bringing a of craft beer, super-affordable snacks and hundreds of records with it.

Brett Hogan and Mike Ross opened the original HopYard location in 2016. The pair, who’d met through working with PEI Brewing Company, wanted to create a space that celebrated local but scoring internationally trained chef Jane Crawford was what Hogan calls a game-changer. “We spent a lot of time driving around the Maritimes delivering beer and talking about business ideas,” he says of his plans with Ross. “But once we found out we could get Jane, that sealed the deal.” Crawford’s known for her creatively themed $8 menus at HopYard, which encourage sharing and change every two weeks, as well as her work at taco and tequila bar Sugar Skull Cantina.

Hogan and Ross searched for a spot on this side of Confederation Bridge for eight months before settling on the Gottingen space, which is actually larger than the PEI bar, boasting 130 seats. “We absolutely love the location,” says Hogan, adding that will be comforting, welcoming and warm. “There are so many good restaurants there, any time we get away from the island we always go to Halifax.”

The second iteration of HopYard will mirror Charlottetown’s location in offerings: 10 taps of craft, an ever-evolving selection of eats and 700 vinyl that customers can thumb through and bring to the bartender to play, effectively DJing for the entire bar. Hogan and Crawford will make the move over to the city to help get the Gottingen HopYard off the ground, Hogan says they’re aiming for a mid-summer opening.