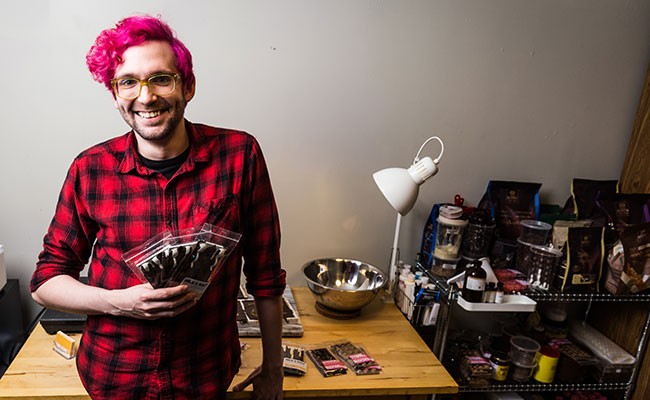 "Chocolate is so fun. It has such a sense of fun attached to it," says Jesse Gallant. "From the moment you're a kid and you try it the first time, it's something that's so exciting and playful."

Gallant is the owner of a small-batch chocolate business called King & North, which has sweetened up pop-up markets and events around Halifax for a little less than a year. Its next stop is the Halifax Crafters Society Spring Market on May 5 and 6.

Gallant was introduced to chocolatiering as part of the the baking and pastry art program at NSCC. When Gallant graduated, he landed a job at Dilly Dally Coffee Cafe. "I was very invested in the baking side of things, you know—muffins, cookies, cakes—that kind of thing. But I found myself missing playing with chocolate after awhile."

Last summer, Dilly Dally owner Laura Draeger suggested Gallant get his chocolate fix by making something for an upcoming market at the cafe. "I was kind of like, 'Yeah, why don't I?'" says Gallant. "It's nice, because it's the kind of thing where you don't need a ton of expensive or crazy equipment to get started." He began with a large piece of marble on which to temper the chocolate, along with moulds, bowls and spatulas. "Other than that, everything else is just extra." 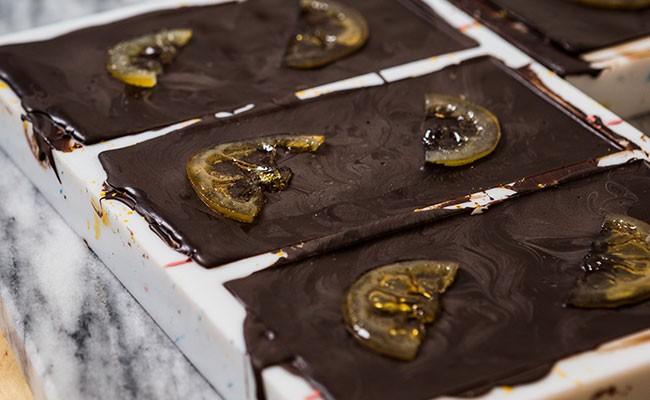 These days, Gallant continues to work for Dilly Dally while conducting his edible experiments on the side.

King & North has three staple flavours along with rotating creations. Gallant enjoys collaborating with other local businesses, such as his "London fog" bar (with earl grey from World Tea House). Spring flavours, which you can find at his table at Halifax Crafters, include a milk chocolate bar with sourdough baguette from Birdies Bread Co. in Dartmouth.

For Gallant, inspiration can come from something as simple as sitting down to eat a snack and thinking about how to incorporate those foods in chocolate. One of the most important things in his process is making sure those flavours come across. "If I'm telling you I'm going to make a London fog chocolate bar, I want you to really know that when you eat it," Gallant says. "I want you to taste that." Hence why he paired earl grey with white chocolate: It has a milder taste and high fat content, "so it's able to draw in those bergamot flavours."

If you so much as peek at King & North's Instagram, it's apparent that aesthetic plays a role in the chocolate as well. "It's important that things look good, too, from a cake that's decorated beautifully to a gorgeously plated dessert," explains Gallant. He decorates using coloured cocoa butter, making each bar resemble a Jackson Pollock painting. Gallant works to make the flavour as consistent as possible, but given that he makes his treats by hand, no two bars are exactly alike. Think of it as a really tasty snowflake.

"That first moment when you see it and you're like, 'Oh, wow, this is a work of art'—I wanted to have that same reaction with the chocolate bars and the chocolate that I was making."