The downtown desserterie is taking their cakes, and cocktails, on the road 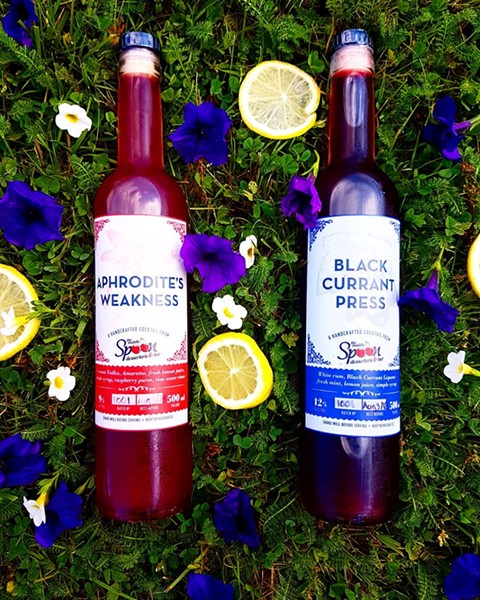 Yup, thanks to The Middle Spoon Desserterie (1563 Barrington Street and 1595 Bedford Highway) you can now get a bottle of mixed drink delivered directly to your doorstep. The source of sweets and boozy concoctions added delivery to its resume at the end of July, giving folks the opportunity to have their date nights and just desserts at home in their jammies if the mood strikes. But alongside the cakes, pies, salads and sandwiches on its online order form are 500ml, pre-mixed cocktails.

“Over the years since we opened lots of people have said, ‘Hey I wish you guys could bottle this stuff so we could have it at home,’” says the Spoon’s co-owner Ciaran Doherty, who’s been working on the logistics of delivering alcoholic drinks since last fall. “We didn’t want to get into delivering food until we could deliver cocktails as well.”

And now he’s doing just that with two of the longest running cocktails on the bar’s menu—the sweet Aphrodite’s Weakness and Black Currant Press. Each bottle pours the equivalent of over three drinks (and costs $19.99), but the catch is you can only buy it online via The Middle Spoon, no-can-do with take-away. Doherty hopes to add more cocktail options to the mix once the dust settles.