The wizards at Propeller Brewing Co. debut a basement bar with a lineup of pinball machines and video games. 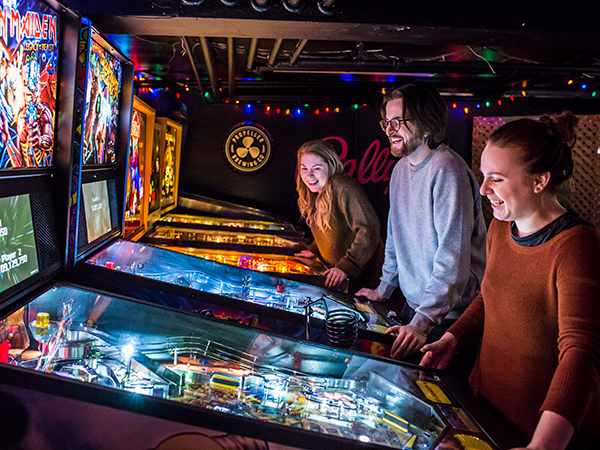 Propeller Brewing Co. (2015 Gottingen Street) is providing some nostalgia to pair with your pint.

The brand new Propeller Arcade Room—complete with its own little bar—opens below the existing taproom this Thursday, January 31. There’s no cell phone reception in the basement which—in the spirit of escapism—may be a blessing in disguise for dates or folks trying to meet new people.
“You could bump into somebody and immediately become friends with them. That’s the vibe that these machines put off,” says Ian Matheson, a Propeller store clerk who’s also a classic game fan. He’s previously brought arcade games to the taproom on a temporary basis “Everyone definitely showed up, and when the machines went away people showed up asking where they were. The next step was this.”

Matheson owns multiple and other game machines. He purchased many of them after they’d fallen into disrepair and fixed them up back to working order. Not only did he champion the idea of an arcade at Propeller—he provided the bulk of the games from his own collection.

The current set-up is a slew of pinball machines: Iron Maiden, Guardians of the Galaxy and Skateball-themed games light up the room. Other options like Space Invaders (Matheson’s personal favourite), Hit The Ice and Big Buck Safari are also part of the mix. The arcade will be open Thursday through Sunday nights.
“Nostalgia is a huge escape from the nine-to-five life that can be a little overpowering sometimes,” says Matheson. The games aren’t the only throwback, either—the room used to be part of Gottingen Street’s old Wormwood’s Dog and Monkey Cinema.

“The concept of putting an arcade next to a brewery that used to be a movie theatre on Gottingen Street is just way too perfect.”