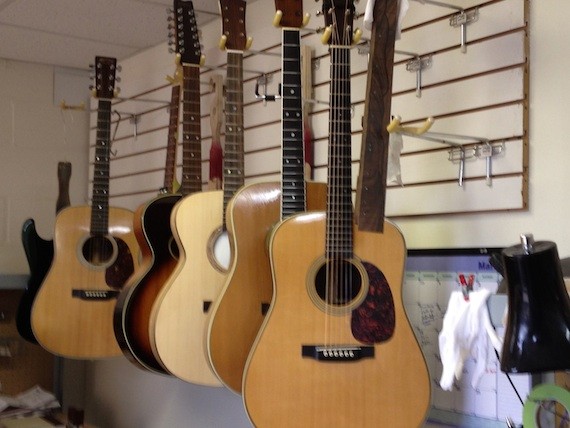 Even with the google map app on my iPhone, I got lost trying to find the Canadian School of Lutherie (19 Pettipas Drive, Unit Z, 481-0170) in the Burnside business park. It's sort of behind Akerley Boulevard, not so far back as the jail, but stuck randomly in a stretch of identical warehouses along a road that is named one thing when you turn onto it, then another as you travel along it. Even when I found the right building, I drove up one side of the complex, then the other, before I realized the school, in a unit labelled "Z," is actually in the front, out by the road, not in the rear, as I had expected.

Somehow, the obscurity of the school is part of its charm, which was made abundantly clear as soon as I opened the door and was greeted by Mitch MacDonald, one of the founders of the school in 2009. The small anteroom to the workshop is lined with hanging guitars, pictures, testimonials and the like, an ordered chaos that suggests, well, nothing at all. This is a place to build guitars, never mind all that other stuff.

Probably, most people would talk about the school by starting with master guitar builder George Rizsanyi, but in retrospect I'm glad Rizsanyi wasn't there the day I visited---he was off to Toronto to start a satellite school; nothing against Rizsanyi, but no doubt his story is told often (I'll get to it), while MacDonald's just as interesting story gets overlooked.

The short of it: There are still people, well, one person anyway, who give a shit about quality, who are interested in the old craft skills and workmanship. A native of PEI, MacDonald moved to Lunenburg in 2008 to enrol in the Heritage Carpentry program at the community college there. We don't talk enough about the importance of such programs in keeping the skilled trades alive in Nova Scotia; completely off the radar is the secondary role the programs play in building an artistic scene and attracting interesting people to this province.

Anyway, while at Lunenburg, MacDonald was introduced to Rizsanyi, who was living at nearby New Germany, making guitars. Rizsanyi has been in the trade for years, and has gained an international reputation, making guitars for the likes of Keith Richards, Peter Gabriel, Sting and Willie P. Bennett, among others. MacDonald shows off a book about the Six String Nation guitar, which Rizsanyi made from, in part, the Golden Spruce. (It's worth the tangental reading time to check out this New Yorker article on the Golden Spruce.)

Together with a third partner, Jeremy Nicks, MacDonald and Rizsanyi decided to open the School of Lutherie. Understand that MacDonald was then just 25 years old. 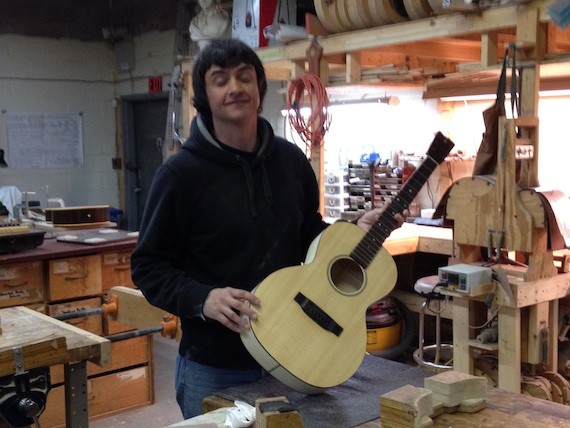 MacDonald has the hapless manner of someone who cares deeply about one thing, and not much about much more, as he gives me a tour of the workshop proper, which is not much bigger than my living room. There are three work tables, a few saws and odd pieces of wood, a bunch of carpentry tools. Some guy named Stu (he doesn't give his last name) is sanding off a nearly finished guitar.

MacDonald tells me that the school attracts a range of students, from high schoolers to the oldest, at 79, and from people who come in for a one-day course, for $325, all the way up to the four-month course for $1,380. (See the complete range of courses at the schools website, canadianschooloflutherie.com.) "But most students want to walk out with at least one guitar," he says. "While a lot of people leave with three---an acoustic, an electric and maybe a bass, or some other instrument."

I'm the first to admit that I don't have the musical expertise to judge the sound quality of the students' creations, but the growing reputation of the school speaks for itself in that regard. For myself, I'm just happy to see a business devoted to serious craft work achieving success.

Canadian School of Lutherie
Prev
Next