Yu Yo makes space for craft

Yu Yo Craft Supply + Tea House is growing the craft community by bringing people together. 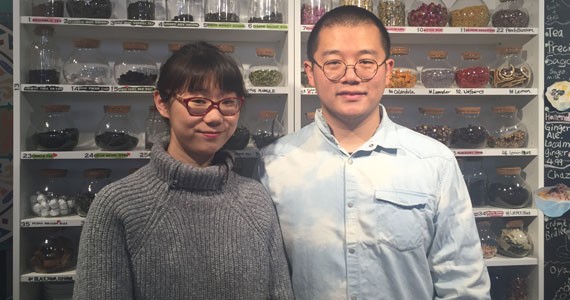 “We make sure the student gets the professional knowledge and to have one finished project after the workshop is done, as a way to trigger their passion for craft,” Xia says.

Xia and Qu first got the idea of a craft supply shop in 2011 when they were still students at NSCAD University. “At that time NSCAD students had a hard time buying materials, especially in jewellery design, natural dyes and fabrics,” says Xia, who graduated with a major in craft.

To make materials, such as wires and silver sheets, available for students, Xia and Qu launched an online craft supply store with the same name, but it wasn’t as successful.

“We think Halifax is still an old-fashioned place with people still doing indoor shopping more than online.” Now, the owners are offering craft and art materials, through their physical and online store, not just for art students and professionals, but also for the general public.

“We found a disconnection between the professional side of art and craft and the general public,” says Xia. “There are open courses in NSCAD, but many people don’t have the confidence to take long-term classes, so we start off with one or two classes here.”

In offering the workshops, Qu, a professional jeweller, says that it brought them closer to the community. The shop also serves traditional Chinese tea, imported from China, as well as snacks made using ingredients from the neighbouring Historic Farmers’ Market.

“Ever since I was a child I had a dream of having a little store and teahouse to share it with friends, like a Chinese salon, where people gather to make and talk about art.”

Even though the shop hasn’t been open for long, Xia and Qu say that they are proud to have been sharing their professional knowledge and Chinese culture with others.

“You need some communication between cultures to bring them together in a friendly setting,” says Xia. “And I think learning a craft from a different culture is the best thing.”

After taking a Chinese painting workshop, Ho Ching Chan, a jeweller, believes that it will give people more confidence. “This is important to the community because not a lot of people are into crafts,” says Chan. “But a workshop can give you an experience to just learn and have something fun to do.”