The newsstand is the only place to buy the paper in Atlantic Canada. 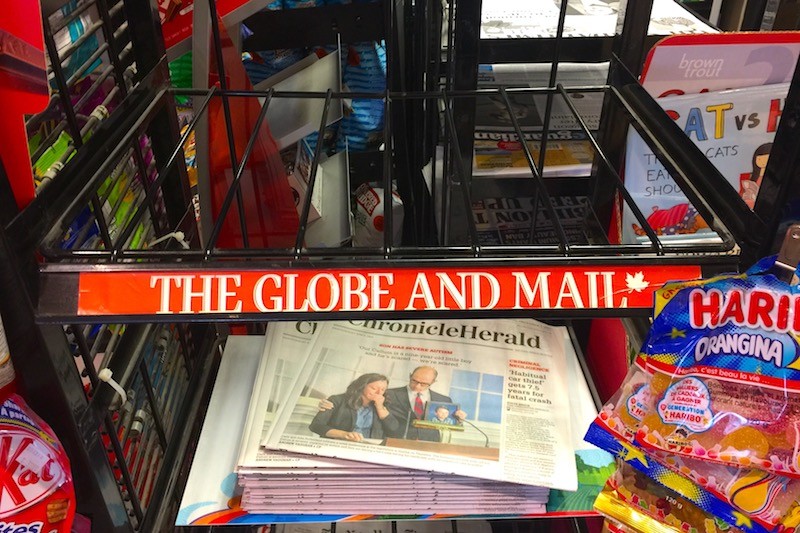 Saturday is always the busiest day of the week at Atlantic News, the venerable newsstand/temple of media, so it stands to reason Fridays aren’t exactly slow. And sure enough, this morning the shop was humming—staff at two cash registers, someone in the back room unpacking boxes of magazines, multiple phone lines ringing. But it was also the calm before the storm, because tomorrow Atlantic News will be the only place in Atlantic Canada selling the weekend print edition of The Globe and Mail, so it’s going to be an especially busy Saturday.

In her office at the store, owner Michele Gerard takes a moment to explain the logistics behind becoming a national newspaper’s lone east coast outpost. As soon as the Globe announced in August that as of November 30 it would no longer bother distributing print copies in Nova Scotia, New Brunswick and PEI (Newfoundland was cut off a few years ago), Gerard reached out to the company. “We were willing to do business differently with the Globe,” she says.

Typically newspaper publishers give copies to their distributors on a kind of consignment model, where the distributor doesn’t have to pay for papers that don’t sell. For the Globe to exit Atlantic Canada, that doesn’t work. They’re willing to send Gerard as many as she wants, but she has to pay for each copy up front. She figured the risk is worth it as long as she doesn’t buy too many papers that nobody buys. As a starting point she asked for 200 copies, then put the word out to her customers. Would anybody want a newspaper?

“We’ve been here 44 years working in print media,” says Michele Gerard. “This is what we do.” tweet this

Decades ago Atlantic News looked like a hoarder’s fire trap, jammed with shelves all over the store overflowing with newspapers from around the world. Easy access to online news really evaporated the market for a week-old copy of Aftonbladet freshly arrived from Stockholm, but as the internet takes away, it also gives.

Gerard’s office is like the bridge of the starship Enterprise, featuring a view onto the bright shop floor. It’s also part engineering, with a big computer-connected photocopier that can quickly churn out large-format reproductions of 700 daily papers from around the planet, Albania to New Zealand. This on-demand printing is popular enough that a handful of Atlantic News customers used the service for their daily Globe and Mail, even when the newsprint version was available, and the store is on its third copier.

The finished product is about three quarters the size of a newspaper, printed on white sheets that are stapled together. It’s a pretty good approximation. “But it’s not the broadsheet,” Gerard says, and the photocopier technician who’s there topping up the toner agrees. There’s still some magic in an actual newspaper; holding those big sheets of newsprint is a unique and special thing.

When Gerard’s customers found out Atlantic News would have the Saturday Globe after the Globe’s retreat from the region, plenty wanted a copy. There was enough demand that a reservation list for one of the 200 copies became a pre-paid list of subscribers who will get the paper—$9.50, taxes in—every week. “The model is there,” Gerard says. “They’re used to the subscription.”

Soon enough Gerard needed more copies from the Globe, but there’s a complicating factor in shipping Saturday papers from Toronto to Halifax so they arrive that same Saturday afternoon: Air Canada Cargo. The freight arm of the widely disliked airline needs its orders confirmed 30 days ahead of time, and there’s a real physical difference between 200 copies of the paper and 250. However, 30 days is a magazine timeline, nowhere near nimble enough for a daily’s weekly. So negotiations continue.

Right now, Atlantic News is getting 275 copies of tomorrow’s Globe, and every one’s already been spoken for. Gerard is hoping to get that upped to 325 for the first run tomorrow, but is being careful not to promise anything. “It’s a work in progress,” she says a couple of times during a short chat. She will be driving out to the airport herself in her Mazda 5, hoping the plane is on time to get the papers back to the shop for Saturday afternoon.

The phone rings yet again. Somebody else hoping to get a Saturday Globe, another name on a waiting list. There’s an added wrinkle, however, as the caller wants to buy a subscription as a Christmas gift. After a few minutes, Gerard hangs up the phone. “We’ve been here 44 years working in print media,” she says. “This is what we do.”