Dear cat people and puppy cuddlers: If you’re in need of an animal visit, these businesses have you covered. 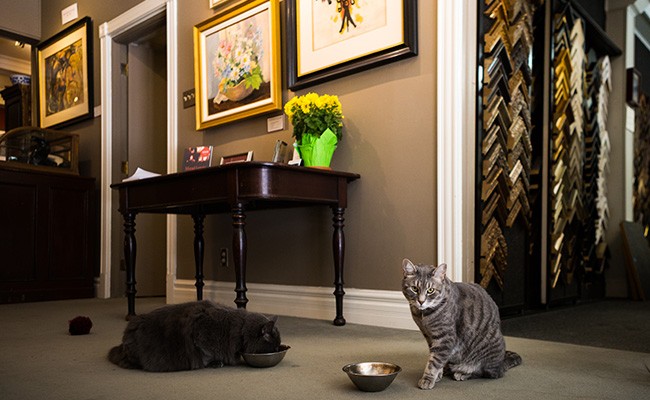 , in cities like New York, there will be a random cat roaming around a convenience store. Or a sleepy dog barely visible behind a desk or counter. Halifax is no different—friendly pets can also be found in businesses of all kinds. And it’s not just cats and dogs. (There’s also a bunny.)

An amicable dog named spends the business days at Oddfellows Barbershop (6451 Quinpool Road.) The six-year-old pug/beagle mix hangs out with the business’ owner—and his owner—Joel Martell. loves to keep customers company while they wait for appointments. “It’s not uncommon for to curl up in a customer’s lap for like 20 minutes,” says Martell. is so popular, in fact, he even has visitors who come just to see him. “He’s definitely the personality around here,” says Martell. “He’s the whole damn package.”

At Zwicker’s Gallery (5415 Doyle Street) are two confident and curious cats, Mingus and Elliot, roaming around the Maud Lewis paintings and antique statues. “They’re always present,” says gallery assistant Rebecca Winn. “Mingus likes landscapes and abstracts—that’s what I catch him looking at the most.”

At 3600 Kempt Road are two dogs ready to greet customers at Etc. Press, Otis and Henry. Joan Warren and her husband are the owners of the two rescues and bring them to work every day. Most days, she says, they either sleep a lot or run to meet people at the door. “They’re part of the family,” she says, “We found it’s really therapeutic to have a dog [here].”

At Finer Antiques (6438 Quinpool Road) is a French bulldog puppy named Wally. He succeeds another French bulldog, Louie, who was in the store for seven years. His owner, Jack Craft, says the breed is typically really laidback and friendly, and this mixes well with customers. “People love him. He’s kind of a celebrity,” he says of Wally. The puppy’s favourite activities while at work? Sleeping, playing and greeting the store visitors “He’s with us all day. And Wally’s a bit of a therapy dog. He can lift somebody’s spirits,” says Craft.

Tucked away behind the front desk of The Dart Gallery (127A Portland Street) in Dartmouth is an adorable grey-and-brown bunny named Huxley. His owner, gallery owner Jane MacDougald, first brought him into work because another bunny he was in love with had passed away. MacDougald says Huxley is very social, charming and cuddly. When it’s appropriate for him, he comes out and meets people. “Bunnies in love is the cutest thing you can imagine,” she says. “He was a little bit lonely and used to having company.”