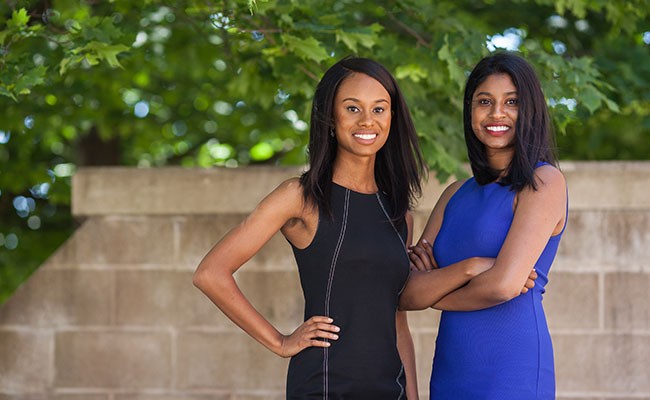 When Ariel Gough and Edwina Govindsamy first met—on a friend date set up by Gough’s mom—there was good energy right away. “I think the first time that we met for coffee at Starbucks, we just clicked and knew that we wanted to start something together. It took us awhile to figure out what that was,” Gough says. Govindsamy agrees.

As they settled seamlessly into a close friendship, the duo began daydreaming of what their side-hustle could be in this #girlboss age. “I remember we wanted to do headphones. It was very random, but I remember us thinking ‘Oh, wouldn’t it be great to go into a coffee shop or Starbucks and just grab headphones?’ But then we realized it wasn’t very innovative,” Gough recalls. “The other one was wireless charging, but we realized we’d be going up against tech giants like Apple. We also thought about coffee mugs and then Korean beauty products,” Govindsamy adds. When the pals realized that perfume was a vital part of both of their beauty routines, an idea took root: A line of high-end, roll-on, coconut-oil based fragrances that were easy, feminine and wearable—titled Bailly Perfume Oils.

“When we started out, we didn’t know anything about perfumes, we’re not perfumers at all,” Gough says, adding they cycled through dozens of suppliers and perfumers (the scent wizards who concoct a perfume recipe) before finding a match as seamless as their friendship. “Initially we found out the difference between a perfume and an de is the alcohol base–it has about 80 alcohol and 20 fragrance. But what we really loved about the perfume oils that we’ll be selling is it’s 100 perfume and no alcohol. So that means the fragrance will stay on longer, and it’s a lot more subtle, so when you walk into a room the whole room won’t smell it.”

“Right now, in Sephora, there are no perfume oils on the shelf—maybe one by Elizabeth and James,” Govindsamy adds. Their debut scent, called Brilliance, fills a void with an offering of black currant, patchouli, vanilla and pear notes, delivered in a coconut oil base that’s vegan, cruelty-free and paraben-free. “We basically went to Sephora and Shoppers and smelled everything that they had and made a list of the types of scents we liked—we like sweet and gourmand scents and something a little fruity—and we’d go to the perfumer and tell them what we liked and they’d then do the mixtures and send back samples,” Govindsamy says. The scent will be available for purchase later this month, you can check their website, bailly.co, for launch details (and to shop online).

“We were inspired by women like us—women who are into fashion and beauty, are ambitious and goal-oriented but also socially conscious and want to help create a better world. And, from there, we thought a perfume oil would be a great way to connect with these women. The roll-on bottle is something they can carry with them all the time, reminding what we stand for—impacting women. And, 15 [of profits] from each bottle sold goes to the Girl Power Project, helping young girls from Uganda stay in school.” Gough adds. “We want to make a difference.”

“I think with any scent there’s an aromatherapy aspect to because everyone reacts to scent differently—like if you smell bread and then think of your grandma who used to bake bread,” says Govindsamy. “We hope people will find meaning within the scent and our brand altogether.”