Designer and artist Amie Cunningham celebrates nearly 10 years in the fashion world by showcasing her process and her products. 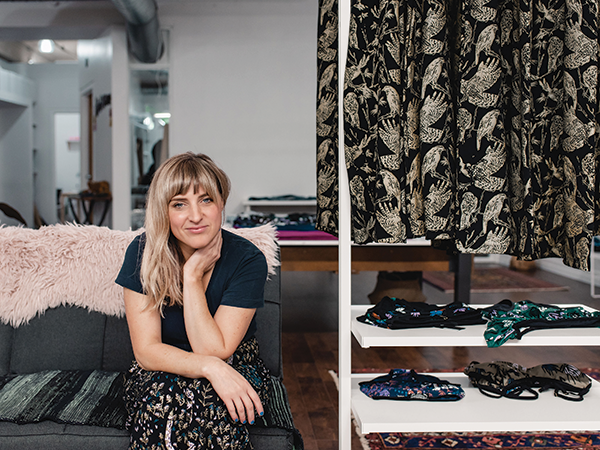 A mie Cunningham uses the word organic a lot when she's talking about Thief & Bandit. From the fabric she prints on, to her creative process, to the slow-and-steady evolution of her fashion line, a nod to the natural sums up her nearly 10 years in business pretty perfectly.

Thief & Bandit was born when Cunningham was living in the States—where she studied painting and sculpture, met her husband and started a family—and experimenting with her creativity by designing t-shirts she sold out of her backpack in Brooklyn. Soon she added jewellery and accessories to the mix, and eventually baby clothes. "This was nine years ago, before cute baby leggings were everywhere," she says with a laugh. "People really wanted them, and that's when I got to setting up my Etsy shop."

She moved her growing family and the line to Halifax in 2012, to be closer to her parents and, she says quite frankly, for health care. Since then, when most of Thief & Bandit's business was coming from America, she's gradually grown it to be a wide-reaching brand (see the Eye See You bra that Cunningham was commissioned to make by Project Runway winner Gretchen Jones for 2017's Women's March on Washington) and bold collection of hand-drawn, hand-printed garments that range from dresses to bathing suits.

This week Cunningham celebrates another organic growth, and officially debuts a new studio and showroom on Barrington Street. It's a bright space that helps her both keep her team together and offer local shoppers a chance to try pieces on, where she'll keep some weekend hours for drop-ins, but work on a by-appointment basis to start.

"I think what's really cool is that people will get to see our process, because we are a handmade company. And you can say 'handmade' till the cows come home, but when people really see us making the pieces...it's kind of magical and I just want to show local customers exactly how we do it," she says. "I love collaborating with people so I feel like it's more of a collaborative art project than a fashion line."

Thief & Bandit currently employs four sewers and a full-time screenprinter, all of whom are recent NSCAD grads. Cunningham says their work, and the team effort, is key to the direction the line has taken in recent years. While shoppers have always gravitated to the power of the print—whimsical botanical, nature-inspired drawings from the line's founder—she wants to push the garments themselves to another level.

"The shapes of what we make are becoming more sophisticated, and that's because of the people who sew for me. It really is a collaborative effort," says Cunningham. "When I say, 'I want a pleated pant for spring/summer,' they're the ones that pattern it out. In the beginning it was super-easy shapes that were not a problem to easily pattern and now things are getting a little more difficult."

She says the bonus of having a space that's both a workshop and a place to shop is seeing the people who buy the clothes. Because Thief & Bandit's clothing has mostly been produced on a made-to-order basis—save for craft shows and pop-ups—it means flexibility and potential for style, pattern and size customization. Cunningham says it's important for her to "design for everyone" regardless of age or gender, and she's working toward being more size-inclusive.

"I see women over 70 coming in and buying a kimono jacket and matching pants, and then I have a 20-year-old just out of art school in the exact same outfit," she says. "I feel like when I'm designing, I'm thinking about a powerful person. A very confident person, not afraid to wear something bold, not afraid to mix prints—somebody who knows what they want."