Taking Blk Gottingen is back for a fall edition

Vendors like No Days Off Apparel have seen growth thanks to the pop-up market. 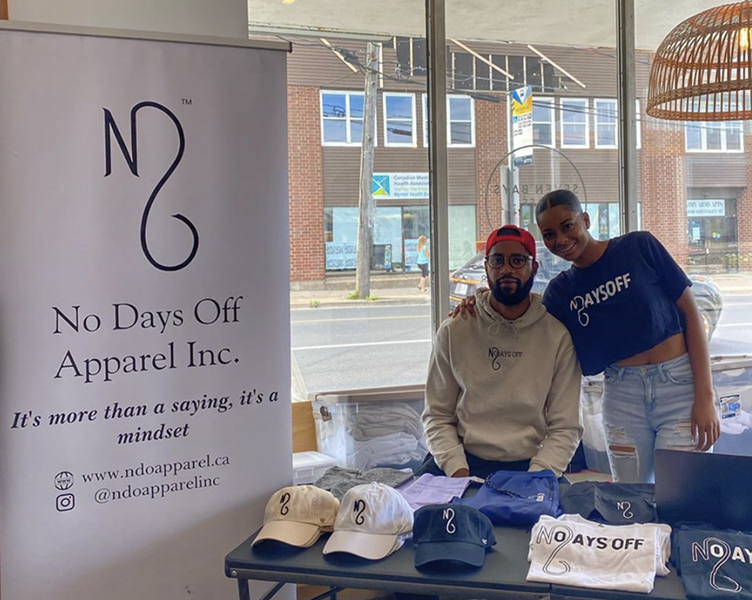 With two rounds under its belt, Taking Blk Gottingen—a market featuring Black-owned businesses—is going for a third this Saturday, September 26.

The 32 guest vendors will be selling and promoting products ranging from art and crafts to clothing, makeup, jewelry and food.

At Seven Bays Bouldering, No Days Off Apparel will be set up with never-before-sold products including custom masks and a new colour hat (pink!), as well as some of the most popular items of their streetwear and activewear brand.

“Our activewear seems to get some pretty good response and that’s really our niche, so we’re trying to like actually push forward into the activewear brand and the activewear market,” says co-owner Chaz Samuel.

No Days Off was set up at Seven Bays during the last event in August, and Samuel says it was a great way to meet new potential customers.

“We were really flattered with like how much good response we got, and we were really connecting with a lot of people. The sales were good also but more so just the fact that we were able to see new people and like other people that we’ve never seen before,” he tells The Coast.

No Days Off started last year in November, inspired by Samuel’s motto of pushing himself in work, school and athletics.

“Basically, the whole idea came because Chaz was very athletic, he’s into basketball and he actually played basketball in high school on a national team back home,” says Shayna Cort, co-owner along with Samuel and his long-time girlfriend. The duo met on their home island of Antigua before moving to Halifax for university.

Since that first spark of an idea, the No Days Off motto has grown to be interpreted in many different ways.

“What’s unique about No Days Off is that it’s specified to the individual. So we love that anybody can identify with what it is and what it means to them personally,” Cort says.

The NDO logo, designed by Cort, is featured on the brand’s apparel ranging from hoodies to crop tops, leggings, shorts hats and more. Each piece is designed by the pair.

“We started off with like streetwear, so like hoodies, caps, t-shirts, crewnecks, and then just recently we actually started off and branched off into activewear,” says Samuel.

The upcoming market will be a mix of new items and those from the most recent athletic collection, Resilience, released in early August.

“We’ll have new masks in and a pink hat because breast cancer awareness month is coming up,” says Cort.

The company is big on social issues, having donated the proceeds from their recent NDOxBLM collection to the Black Cultural Centre for Nova Scotia. The duo says they’re happy to be a part of the wider Halifax community and want to be able to give back even more in the future.

“Growing up in Antigua there is like a really big sense of community,” Cort says.
“And that’s one thing that we love here in Halifax and why I’ve stayed here for so long and why Chaz himself sort of fell in love with the city here, because it’s also about that sense of community.”

No Days Off will be set up at Seven Bays Bouldering on Saturday from 12-5pm. For the full list of Taking Blk Gottingen vendors, check out the Facebook event and the map below.