Since first opening in Halifax in 2011, Serpentine Studios has moved to three different locations. Now, the dance studio is once again a nomad in the rental landscape of HRM, searching for a permanent space that fits all its needs.

“We need a space that’s large, a good amount of square footage for dance. We need there to not be a lot of obstacles,” says owner Laura Selenzi. “We need high ceilings 'cause we use hula hoops and a lot of belly dance props you need high ceilings for. And we need to be able to make noise, and we need like an entrance that our students can access without a buzz code.”

When Serpentine Studios first opened at 1668 Barrington Street, the building provided everything it needed, with only one support pole in the large space and a central location. But, Selenzi says, “that space was kind of at the top of our price range.”

After three years, building owners Starfish Properties wanted to renovate and raise the rent even more.

“They wanted to redevelop some of the space so they wanted to take away our kitchen and storage area and our bathroom, and then build us like a smaller bathroom,” says Selenzi, “But they weren’t going to take any of our rent away, they were going to keep it the same if not higher," she speculated, "and they wouldn’t let us sign a new lease.”

So before they could get booted, Serpentine Studios began the search for a new space. “We were like, we don’t want to wait around and get kicked out, we want to move on our own terms,” says Selenzi.

The studio came across 1489 Birmingham Street in fall 2014, the now-demolished Mills Brothers building, where Lululemon was the anchor tenant on the ground floor.

“It was a very good rental rate for Halifax for that amount of space,” says Selenzi. “It wasn’t perfect for us, the ceiling height was lower, the layout was a little tricky, there was a support column or two, but it had a really good vibe. It was really beautiful and the landlord Mickey [MacDonald] was really great to deal with.” 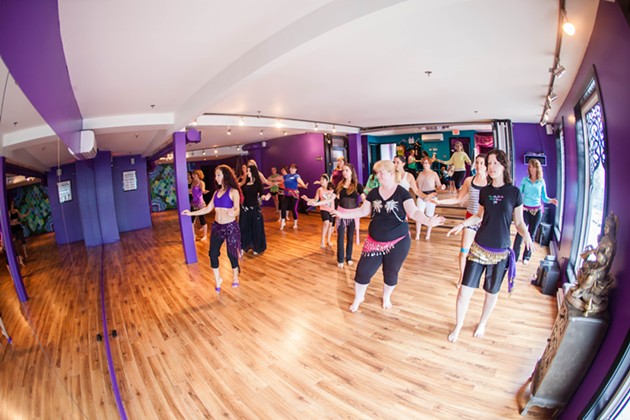 But it soon became public knowledge that time was limited for the historic building. “We did know through the grapevine that that building, the eventual plan was for it to be redeveloped.”

In 2017, Serpentine decided to get ahead of the wrecking ball again and began a pre-emptive search for a new location. “We knew that eventually it was going to be redeveloped and again, we didn’t want to wait around to get kicked out.” 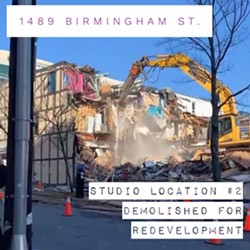 MacDonald and his brother, who own Micco Group—along with developer Danny Chedrawe and Westwood Developments—finally demolished the old Mills Brothers building in 2020.

But Serpentine Studios had already moved into the second floor of 5527 Cogswell Street, near the corner of Gottingen Street. “That was closer to the north end, which was our ideal neighbourhood to be in, it’s closer to where we live as well, and it was a little cheaper so we were really excited about that,” says Selenzi.

After alerting its students and clients about yet another move, Serpentine Studios began adapting to its third space in five years. “Each move was extremely costly for us and caused quite a bit of confusion for our students and people who had gotten used to our whereabouts. It took quite a toll on our business each time,” adds Selenzi.

Then, in 2019, Selenzi began hearing rumours that the Cogswell Street building, owned by the Metlej family, would be redeveloped too. The Coast reached out to Principal Developments and Templeton Properties, both owned by different branches of the Metlej's, but neither returned our calls for comment to confirm who owns the building. The Metlej Group group, a third branch of the family, told The Coast they do not own the property.

“The radio station, the anchor tenant downstairs, they started moving their stuff out and we were getting a little nervous. And then we caught wind that yes, they were planning on redeveloping that entire lot,” Selenzi says.

It wasn’t long before Serpentine Studios was on the hunt once again for a new space. But this time, there are fewer options than ever before. “We were looking and looking, we couldn’t find anything remotely in our price range,” says Selenzi.

The heritage buildings that were once in the studio’s price range have been developed, and the rent has risen along with the high rises that now dot the Halifax skyline.

“These places that were affordable like Birmingham Street and Cogswell Street were in our price range but they’re on the fast track for redevelopment. We didn’t want to make that mistake again. says Selenzi. “So we started looking at these new developments, and they’re all double what we can afford, realistically, as a business.”

Since leaving Cogswell Street at the end of March 2020, Serpentine Studios has been using a mix of online classes, and renting space from local pilates studio Synergy PhysioPilates Studio, at 2742 Robie Street.

Selenzi says it’s not the perfect solution, but it’s the only option right now. “The space is lovely and we love the location. But because there’s no mirrors, it’s not an ideal long-term solution for us,” she says.

Serpentine’s floor-to-ceiling mirrors are in storage right now, and because they cost hundreds and hundreds of dollars to transport and install, Selenzi is holding out for now. “In the current climate that level of commitment is a little scary,” she adds.

Selenzi says she doesn’t want to scare Serpentine's dance students, but the future is very uncertain for the studio. “Basically, no, I don’t think that we’ll ever be able to have our own space again,” she says.

For Serpentine Studios, that would mean the loss of a sanctuary for students and instructors alike. “They breathe a sigh of relief from their everyday lives. I always use the word oasis cause it’s a bit of an escape for everybody. Having a special space has been a big part of what we offer as a studio. That space meant a lot to us and it meant a lot to our students, so it’s really hard to let go of that” says Selenzi.

But on a grander scale, it’s evidence of a pattern that continues to persist in Halifax’s downtown.

"They raised the rent and they redeveloped to the point where the only people who can afford it are these huge multinational corporations, big businesses,” Selenzi says. “And I just worry that Halifax is losing what makes it special.”
Prev
Next