Burnt Church: Hanging out in the music teacher's pet cemetery 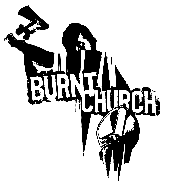 Burnt Church (named after “a small, yet controversial, fishing town in New Brunswick,” says guitarist/vocalist Mike Parks) haven’t been together quite a year yet, but the band is made up of some scene vets. Featuring Mike Parks (Prisoners, On The Blood of Others, Raygunomics) and Gerald Smith (Existench, Gorebage, Thy Flesh Consumed) and (Fredericton's Hard Charger), Burnt Church showcase their powerviolence-inspired sound Sunday, November 29 at Gus’ Pub with Moncton’s Sigil of Aeons, Fredericton’s Gravel Chewer and Panic and War (9:30pm, $5).

Parks thoughtfully provides a music lesson. “Initially we had set out to be a powerviolence band. For the uninitiated the term means a style of hardcore punk played by handful of hardcore that mostly all resided in the Bay area of California in the early 90's. Some genre-defining acts are Man is the Bastard, Spazz, Capitalist Casualties and Crossed Out. The genre is characterized by lightning blur verses and skull-crushingly slow breakdowns.” Now they blend together power violence with a wider range of influences from punk and metal.

They are looking forward to recording 10 tracks with xEnvisionx’s Mitch Kelly in December, to be followed by a 7inch and touring in the new year.