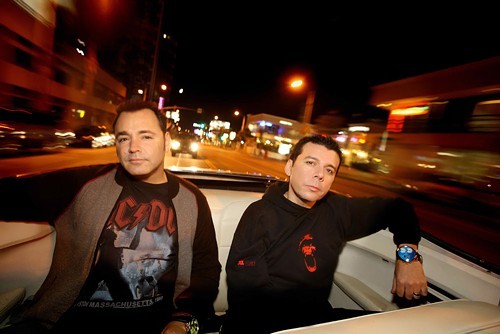 So Infinity Promotions - the people who nearly brought us Crystal Castles that one time - are now bringing in the Crystal Method on December 3 to the Paragon. (I like the person on my Twitter feed who quipped "Who's next? Crystal Gayle?")

Now, mind you, this is a DJ set, so I don't know if that means they'll be playing songs from their most recent release, 2009's Divided By Night or if they're going to play a bunch of remixes or just playing their favorite jams or what. Either way, people are pretty excited about this. Now, I know 1997 was awhile ago, but I got kinda this fuzzy nice feeling looking at photos of these guys, still doing what they're doing. I confess I still enjoy that song they did with Filter (Oh ridiculous Spawn soundtrack! That Atari Teenage Riot/Slayer tune was a gem) and my friends who are into this stuff say it will sell out, so it might be time to start digging in the couch cushions again, hawking heirlooms, selling pints of your own blood for cash, you know. All the usual things. December is such a dirty month.

With Logan Hudak and Chris Morrison opening. Tickets are $25 in advance and $30 at the door. You can get them at ticketpro.ca as well as Video Difference and United Bookstore.