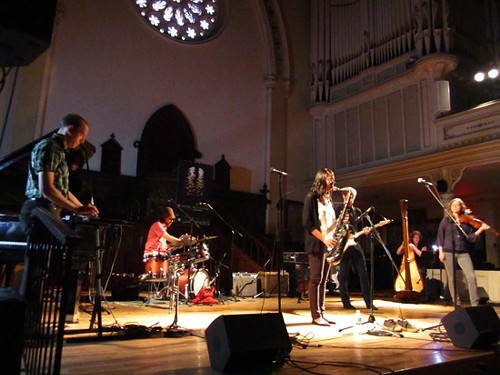 The last night of the jazz festival featured the final of drummer Jerry Granelli’s four 70th-birthday shows and Toronto musician Charles Spearin’s The Happiness Project at St. Matthew’s. I caught the last few songs of the Jerry Granelli Trio’s (Granelli, Dani Oore, Simon Fisk), which were accompanied by vocalist Mary Jane Lamond. The minimal compositions featured a mournful sax and Lamond singing in what initially sounded like an unfamiliar language, then perhaps a blend of French and nonsense vocals. The trio’s music had a nice texture, though I’m not certain the vocals were necessary.

Charles Spearin, known principally for his work in Broken Social Scene and Do Make Say Think, introduced his set by explaining Tibetan logic, which involved a shoe-removing demonstration, and then explained The Happiness Project. Spearin began the project by recording interviews with his neighbours on the subject of happiness, then created compositions based on working out the notes of their voices. After explaining this process, Spearin played a clip of one of his interviews, then brought his saxophone player onstage to play along to the same clip. The early part of the show felt more education than gig, which was a nice change. After the demos, Spearin’s band all came out and got into the music, punctuated by explanations and samples of the recorded audio. Spearin’s music was usually more engaging than the recordings, and some of his compositions are more interesting than others—his three-year-old whining about lunch wasn’t a particular highlight, but his use of the peculiar intonations of the voice of a neighbour who was deaf until receiving a cochlear implant at 30 was. The music (played on harp, piano, trumpet, guitar, drums and saxophone) had a sparkly sound overall—not originally intended as jazz, and the sound of Spearin’s other bands cropped up for a moment from time to time. There was something surreal about hearing recordings of Spearin’s backyard interviews while he stood at the side of the stage. The set seemed to end abruptly, but two band members returned onstage to do an improvisatory version of one of the songs, a freer sound than the more structured set. If The Happiness Project is a concept record and Spearin describes the show as a live performance of the record (though the album came out in 2009, he’s only performed the songs a handful of times), it makes sense that it’s a concept show. Does the concept show work? I think mostly, but it could have used a little less structure, a few more moments like the last two minutes.