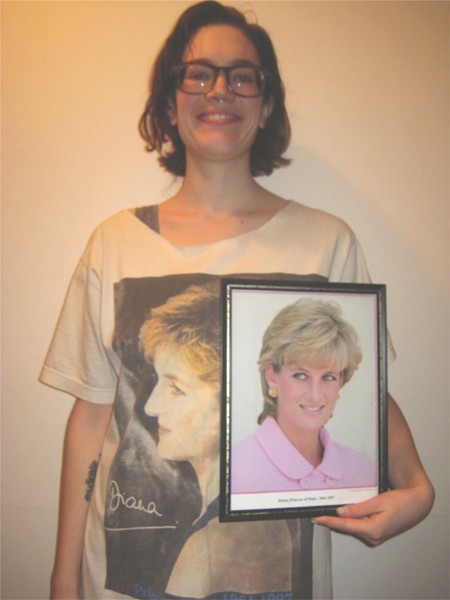 Elise Boudreau Graham's fascination with Lady Di began a while ago, with a commemorative mug. “I’ve been collecting Lady Di souvenirs for a while,” she says. “I bought a mug with a picture of Diana and kept going from there. I think it was because her haircut reminded me of my mom.”

“I decided to make (the) buttons as a way to bring together all the imagery I was accumulating,” Boudreau Graham says. “I didn’t want any repeating photographs, kind of like a challenge to myself. The effect of seeing these buttons as a singular installation is perverse. It makes me feel like an adolescent fangirl. The buttons remind me of a Google search or a Facebook profile page, and it’s like I’ve spent too many hours on the internet.”

The project contrasts the tactile with digital, highlighting how the business of fame has changed with the introduction of 24/7 blogging and gossip websites.

As her collection grew, Boudreau Graham found herself less interested in Diana, and more interested in her stockpile of everything Di. “I still don’t know a lot about Diana’s life because I only used her biographies as visual source material.”

“The funny thing is that while I was poring over these books I would catch myself gasping at how beautiful Diana looked in certain photographs,” Boudreau Graham says. “What started off as a detached or kitschy interest turned into a true emotional attachment.”