I’ve always been enamoured by Asian music. Well, at least Asian interpretations of Western music. You may or may not remember (probably not) my name-dropping of Japanese kraut-rock enthusiasts Cornelius in 2011's Best of Music year end issue. But my love of Japanese art rock doesn’t stop there. Who could ignore the stoner riffs of glam-metal juggernauts Boris, or the nauseating arrangements of Japanese psychedelic godfathers Boredoms.

But when it comes to Asian pop, I know nothing about the history of rock n’ roll in China. So after picking up my NXNE press pass I headed down to Toronto’s National Film Board headquarters to watch the Canadian premiere of Andrew Field’s Down: Indie Rock in the PRC.

It turns out there was a reason I hadn’t heard of many Chinese rock bands—they didn’t really exist until a few years ago.

The film charts the country's affair with popular music, beginning with a massive performance by Wham! in the mid-1980’s. This is the point when rock n’ roll first reached the People’s Republic of China. Yes, you read that correctly. Wham! brought rock n’ roll to China. 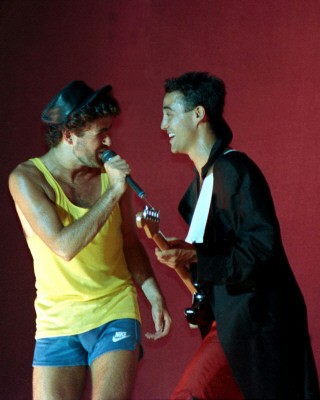 But as society progressed a slew of new punk bands cropped up in China. Drawing influences from Nirvana and Joy Division came bands like Subs, Carsick Cars, Lonely China Day, and PK 14. Even though this sounds like the bill from a high school battle of the bands in 1994, the bands were surprisingly good, delivering a kind of sludgy interpretation of ‘90s slack-rock with production that resembled the punk sheen of At the Drive-In.

It was a pretty eye-opening experience. And with that I went back to my brother’s apartment and picked up some Mamma’s Pizza and fell asleep watching Game of Thrones.

After some pretty lucid dreams involving multiple beheadings and overtly gratuitous incestual sex, my brother and I grabbed something to eat at Whole Foods (because we’re verrry punk rock) and headed down to catch headliners Bad Religion at the free punk showcase at Yonge and Dundas Square.

Now, I grew up in Toronto, but I was never living in the city when Yonge and Dundas made it’s transformation from creepy wasteland into a pseudo-Times Square/cultural hot spot for the city. When I think of Yonge and Dundas, I think of glue-sniffing derelicts trying to rob me outside HMV and people buying drugs at Popeye’s, not free punk rock shows.

Anyways, if you end up heading to the free Matt Good show tonight or Saturday’s Flaming Lips concert, let me give you a tip: don’t arrive three hours after the show has started, because you’re not going to see anything. 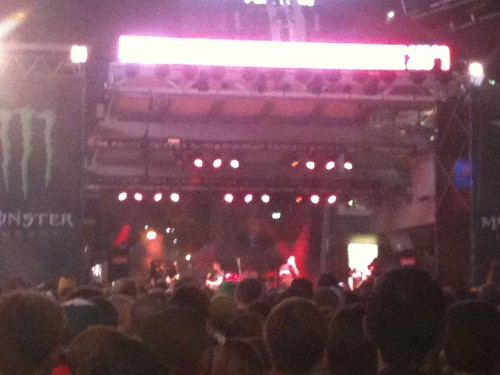 No joke, this was the best vantage point I could find. Actually, that’s note true.

This was taken after finding a bunch of garbage to stand on top of. We actually debated going to Milestone’s and getting a seat on the patio four storeys above the venue, but that was even a little too anti-punk rock for two dudes who just had dinner in Yorkville. So yeah, get here early for concerts.

I didn’t get a chance to see Bad Religion when they played the Forum a few years ago, but if I know the Forum, I’m sure it sounded like poop. Nothing against Bad Religion, but a bingo hall with a tin roof usually doesn’t have the best acoustics. But the sound at Y&D was surprisingly clear for a bunch of punk rock blasting through the open air between skyscrapers and LCD televisions. I attribute this to the fact that unlike most punk bands Bad Religion has three guitarists, so they sound pretty freakin' powerful.

For a band that is made up of a bunch of guys in their late 40’s, Bad Religion sounded insanely tight and looked pretty healthy (minus all the balding). There was the usual pointless stage banter that accompanies most punk shows—jokes about Reagan, Celine Dion and Justin Bieber—but there were a few gems amongst all the nonsense. Graffin mentioned that the band had a new album in the works they expect to come out next year (which would be their 16th. Who are they, Yes?) and bassist Jay Bentley said the band’s next tour would be a strictly Canadian endeavour.

And with that we left before the encore to beat the crowd and find a good bar playing the OKC/Miami game, bringing a close to my mostly un-punk rock day of punk rock at NXNE 2012.