Sled Island round up

Raw dog rock gods Bloodhouse are the first band of my official Sled Island 2012 experience. The audience at the legion waded through the swampy riffs and swirling delay as Bloodhouse cut loose on them.

Some other bands played that I didn't really pay attention to because I'm a jerk.

Still jet lagged, I decided that take it kind of easy that first night and went to sleep.

Thursday: Monomyth at the Ship and Anchor

Monomyth took the stage Thursday night at the Ship and Anchor, it was really really loud. Calgary immediately fell in love with their sugary sweet hooks and boyishly good looks.

On Friday afternoon there was a cool backyard show featuring Quaker Parents, Cousins, Dog Day, Freak Heat Waves, Calgary's Faux Fur and Jessica Jalbert from Edmonton. It was really cool seeing so many bands (and people) from home all at once in a stranger's back yard.

I was too busy having my mind blown by Faux Fur to get any pictures of them, they're all under twenty and are making crazier music than most adults I know.

Quaker Parents at the cool backyard:

Cousins at the cool backyard:

Dog Day at the cool backyard: 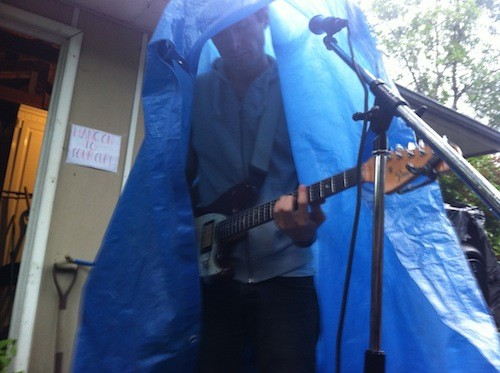 The rest of Friday was a Four Loko induced blur.

I woke up at the crack of noon to go catch Jon Mckiel at the Palomino Smokehouse. A slight scheduling conflict forced Jon and the Grundy twinz to play a quick, to the point set.

Jon Mckiel at the Palomino:

I followed the trio to local 510 to watch them reconfigure and play as Quaker Parents. 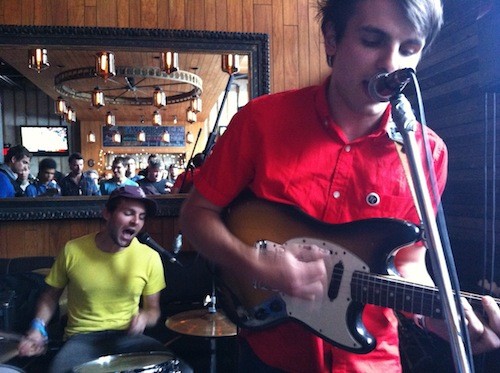 Next at Local 510 is Each Other, the band I was most looking forward to seeing. Local 510 is just about bursting at the seams by the time the Montreal/Halifax trio play.

Before the night is over I go see Each Other one more time at the legendary Tubby Dog.

Each Other at Tubby Dog:

This is a thing you can get at Tubby Dog:

Sled Island Each Other Quaker Parents
Prev
Next