Why buy a novelty snowglobe when a personalized souvenir is so much better? 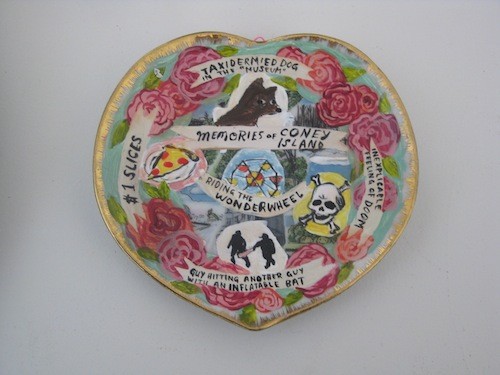 Kate Walchuk is in pretty good shape. After graduating NSCAD in 2011, the young artist spent a year as a self-proclaimed roadie, travelling around with friends whose bands were touring. Amidst the parties and performances, Walchuk fell in love with something most people consider to be a scam: souvenirs. With that came the inspiration for her upcoming show, Good Shape, opening at Seeds Gallery (1099 Marginal Road) Wednesday, April 18, 5:30pm and running to May 19. The double-entendre comes from Walchuk’s work, which is mainly done on shaped surfaces, as well as her state of mind. “The idea of being in good shape,” says Walchuk. “Like I’m doing okay.” The focus of her exhibit, which will be her first solo-show at the NSCAD alumni gallery, is herself; “I’m acknowledging things in my own life are good enough to make art about,” she says of her experience-inspired creations. Using acrylics, Walchuk has painted scenes from her travels onto seashells—some of which were found, others bought from garage sales. There’s one reminiscent of the time she got pink-eye in Texas and another of the time she saw a fake rock at a McDonalds in Little Rock.

As a student, Walchuk never considered making art from her own life. Now, she says even though it’s “incredibly self-indulgent, it’s just like writing what you know.” Seeds Gallery manager Krista Hull approached Walchuck to do the show six months ago. Walchuk, whose biggest expectation at the end of this is “a fun party with all my pals,” says she isn’t feeling too stressed about her return to NSCAD. Instead, she’s happy to be returning to her artistic roots. The university, home to some of the city’s greatest artists, has recently been in the market for financial and provincial support, which is why Walchuk is eager to get involved. “I’m excited to be showing at NSCAD,” says Walchuk. “It’s an important time for NSCAD alumni to get involved.”

Walchuk works at Lost & Found (2383 Agricola), organizing art shows and assisting other artists. Like most artists, she knows all about the difficulty of making a profit off painting. Walchuk considers herself an amateur artist in the truest sense of the word. “‘Amateur’ comes from the root word ‘amour’, and I’m doing art for the love of it.” Aren’t we all.