Lampposts on a bender 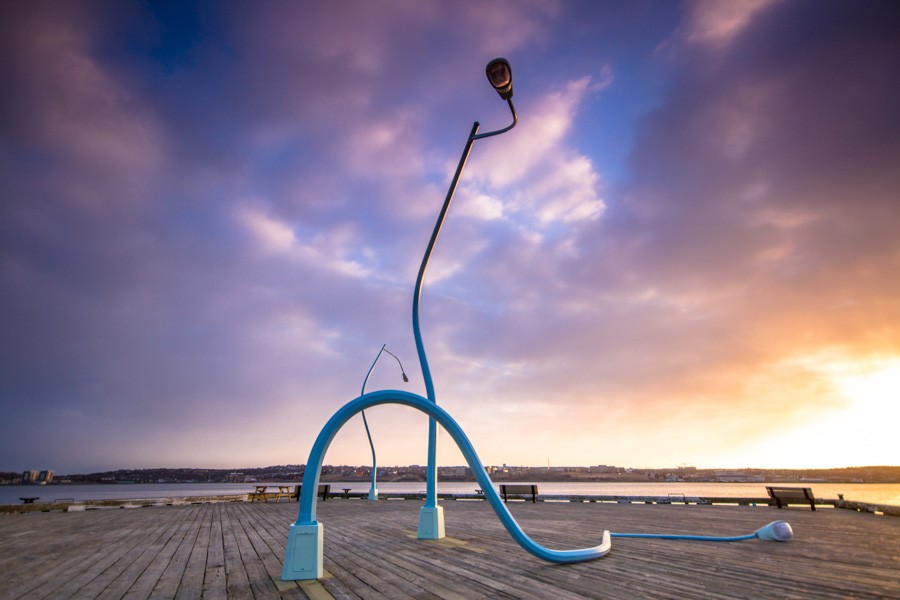 The installations—"Fountain" and the diptych "Got Drunk, Fell Down"—are part of a series entitled The Way Things Are. They are nakedly honest portraits of unseemly behaviours that are often playing out on our own streets after dark, but it is easier to stomach a streetlamp—rather than a person—urinating off the pier.

In the diptych, one of the poles looks with the lamppost-equivalent of concern, at another post passed out limply at tripping level across the boardwalk. Lets just hope any locals on a waterfront bender watch where they’re walking. The city doesn’t want to install a safety fence, though.

“With some public art pieces […], it is impossible to keep people from climbing on them,” admitted Kelly Rose, marketing and communications manager for Waterfront Development.

All Haligonians are familiar with The Wave, Donna Hiebert’s Sackville Landing sculpture that was, until last year, surrounded by a fence to—unsuccessfully—discourage climbers. The fence was removed and a rubberized mat installed last spring, as the city admitted defeat.

Instead of attempting the barrier route this time, Waterfront Development has taken other precautions to ensure the safety of the pieces and the public.

“The project is installed on an area of the waterfront that provides a lot of space to move around and the pieces are spread out,” says Rose. “Our waterfront security includes this area as part of their regular patrol and would address any situations if they arise.”

The light covers are also made from shatterproof Lexan.

The artists are comfortable with people engaging with the sculptures; in fact, they prefer it.

When the pieces were showcased at Toronto’s Nuit Blanche last year, viewers were barred by caution tape because artists couldn’t have any objects blocking the sidewalk. “A security guard told us we either had to take it down or tape it off,” says Sonnenberg.

The artists say they want people to be able to interact with their pieces, so the lampposts’ current location is an ideal situation. “There’s already a narrative within the work, and interaction just allows the viewer to be part of that narrative,” says Sonnenberg.

“We’re hoping there will be a certain amount of respect for the art.”

The Dali-esque fixtures are only scheduled to illuminate South Battery Pier for a year, but such large pieces are difficult to transport and Sonnenberg says she would love to find a permanent home for them somewhere in Halifax. Hanson and Sonnenberg, now Brooklyn residents, started collaborating after they met while studying at NSCAD in 1982, so a Halifax home makes sense.

The waterfront sculptures compliment a 25-year retrospective exhibit of the pair’s work, also titled The Way Things Are.

The gallery is not a very large space, and lots had to be left out. “I think we can still get at the kernel of what they’re all about because there’s similar themes throughout the work,” says Hanson. “We use the vocabulary of street objects and mundane everyday objects.”

The exhibit will run from June 22 to September 21 at the Art Gallery of Nova Scotia.