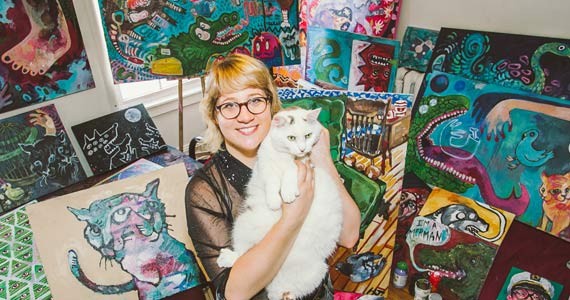 Since October 2012 The Pigeon Galley has been bringing together members of the Halifax arts community through entertaining evenings featuring unique art displays, bands from all genres of music and a little comedy thrown in there too.

The idea for The Pigeon Gallery was conjured up by its creator and director, Halloway Jones. As someone who went to NSCAD, has been in multiple bands over the years and has even done a bit of comedy, Jones has connections in a variety of art and entertainment circles.

Now, it’s on to other things for Jones, and so The Pigeon Gallery must come to an end. In order to say a proper farewell, Jones has an evening planned that’s sure to send the gallery off with a bang.

The final show, aptly titled Death to the Pigeon Gallery, will take place on Saturday, April 20 at 6pm—according to the event’s Facebook page, funeral attire is welcome.

And that’s not all—Halifax artist Benjamin Woodyard will be showcasing an especially captivating display of ceramic art pieces including decorative molds of his own penis, displayed jokingly as the penises of various celebrities—told you The Pigeon Galley planned to go out with a bang.