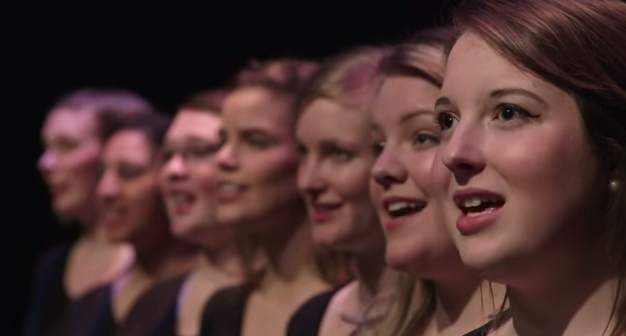 The Canadian choral community is descending on Halifax this week for a “feast of music”.

Choral music conductors, music educators, accompanists, composers and singers of all ages are taking part in a biennial conference called Podium. They’re here for professional development, but a happy by-product is that there are almost two dozen opportunities for the public to hear choirs from across Canada in performance.

Halifax’s own Xara Choral Theatre Ensemble is debuting a new piece at Podium called Waiting on the Eastern Line, and they gave a preview performance of it on Mother’s Day.

The short piece (30 minutes) tells the story of Nova Scotian women left behind during the First World War. It is a six-song journey that beautifully portrays the anguish and loneliness of the women as well as their day-to-day camaraderie and hard work. The piece ends with a moment of pure joy when the men return.

As is usual with a Xara performance, the music is beautifully executed and soul-touchingly gorgeous. The incorporated movement and spoken word fleshes out the story and makes Eastern Line feel like a fully-formed piece of theatre.

Waiting on the Eastern Line will be presented on May 15 at St. Matthew’s United Church in a show that include a performance by the Annapolis Valley Honour Choir.

For the completed Podium 2014 schedule go to podium2014.ca