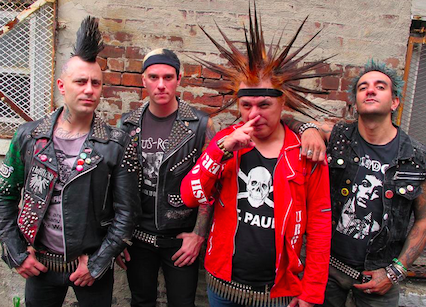 Update: Looks like the event has been cancelled by the Seahorse.

The Casualties' upcoming performance at the Seahorse might be dead on arrival due to the punk band's history with sexual assault accusations.

The New York band is currently scheduled to perform August 23 at the Seahorse Tavern on Gottingen Street. The Coast has learned one of the opening acts—local band Spew—has dropped out of the show over the online sexual assault allegations which have been made against Casualties’ lead singer Jorge Herrera.

“We’re currently going through the situation here right now,” says Troy Arsenault, the Seahorse’s booking and promotions manager. Arsenault says the allegations about Herrera’s history were only brought to his attention three days ago.

“It’s all fresh to me,” he says. “This is obviously a concern. Especially when it pops up out of the blue.”

Formed in 1990, vocalist Jorge Herrera is the only original member of The Casualties still performing with the band. In 2013, Herrera was the subject of a blog post by a “recovering scenester thirty-something stay-at-home wife and mom” going under the pseudonym “Beth” that claimed he sexually assaulted her as a teenager.

“Beth” claims that at the age of 16, the then 26-year-old Herrera cornered her in a room demanding sex. When she fled, he chased her down a hall, pinned her against a wall and sexually assaulted her.

“The irony of the band’s name, and me being a CASUALTY in my own right, was not lost on me. All these years later and every time I write those words, speak them, re-live them, I choke back vomit. I remember how The Singer smelled, tasted, his jagged rotten teeth, his worn leather skin, how the band argued about not cutting their hair because it was their statement, and mostly how utterly fucking helpless I felt. How scared, dirty, ashamed, used, rejected, confused, alone, and ruined I felt.”

Herrera has faced no criminal charges and none of Beth’s accusations have been proven in court. The initial post did lead to substantial online criticism of Herrera and his band, though, including a Facebook group dedicated to boycotting Casualties shows wherever they occur.

Other stories about Herrera’s alleged history of predatory behaviour—all untested in court and many of them posted anonymously—have been collected online. Incidents range from allegations of making inappropriate comments to fans, to bragging about sleeping with underage girls and other claims of sexual assault.

“I also have experienced Jorge. I was thrown against a wall and he tried to force himself upon me. I was 16. (15 years ago) I am lucky because I had a group of friends with me. As soon as I read this post, a flood of memories of that day hit me.” —DRo

“How is this shit even disputable. It’s been known for years that this dude is a fucking pervert. I heard about it at least 10 years ago. When NUMEROUS people say that someone has assaulted them over the span of OVER A FUCKING DECADE, do you really need to catch him in the act to believe it?” —Dan

Another common element in the accusations is the depressingly common occurrence of industry peers knowing about predatory behaviour and not saying anything about it.

“By reposting this story, I found out that this also happened to a girl in my town. No words can express how horrible this is, but much respect to you for having the guys to speak out on it. Fuck this guy, and his band, and every “friend”, promoter, and fan who knows about this shit and does nothing. Keeping quiet only allows it to happen to another girl.” —BxNeurotic

Last year the band released a statement about the accusations, describing Beth’s account of categorically false.

“The story was fully disproved and the person spreading this accusation never provided any corroborating evidence to it happening. In fact the opposite happened. Multiple people with direct ties to the accuser have stepped forward to tell the band why they know this accusation to be complete lie. One even went so far as to offer to step forward and to speak to attorneys or law enforcement if need be to clear Jorge’s name.”

The statement also mentions the victimization and "manhunt" Herrera has faced since the allegations of sexual assault were made.

“The mob has lit the torches and wants to see blood. Not a thought is wasted that it could hurt an innocent,” reads the released statement. “We will not stand by, while an innocent man’s life is being ruined. The only thing Jorge can be found guilty of is playing in a punk band.”

Since then, the band has continued touring with Herrera at the helm and stood in solidarity against the online allegations. Something Troy Arsenault actually finds rather strange.

“Usually in these positions people step down right away,” he says. “I’ve got a bucket full of people who have been accused of this sort of thing in the entertainment business who just disappear.”

Arsenault wouldn’t confirm whether any opening acts for the August 23 show at the Seahorse had officially dropped out, or whether the Casualties’ appearance would be cancelled. The bar’s management is currently going through “due diligence.” They’ve contacted the Casualties’ representatives about the allegations and are (as of this afternoon) waiting to hear back before announcing anything. Whatever the outcome, Arsenault isn’t thrilled about being caught off-guard.

“I would have liked to know this even before we put the offers through, frankly,” he says. “It’s putting the bar in quite a weird position.”