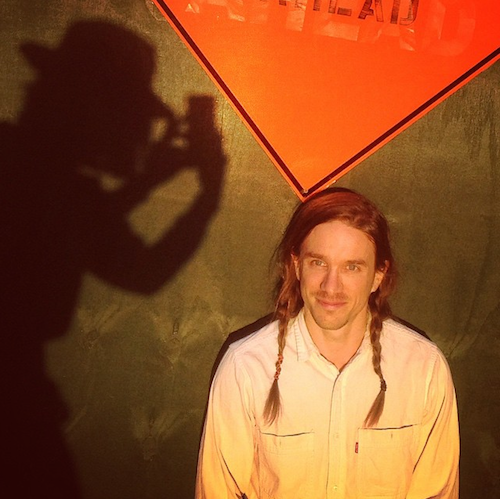 Troubadour rock-songwriter Tyler Messick wants you to know he’s back. After a 10-year break, his one-time Halifax band Museum Pieces features a new lineup and record on the way. Following a string of early- and mid-2000s releases like Philadelphia, and the departure of long-time creative partner Andy March (Crosss’), Messick moved to Montreal to keep the band rolling with the boys from Special Noise.

“I moved there to play with the musicians I love to play with and watch, and so I thought I’d be touring a Museum Pieces record across Canada with Jeff Simmons (Each Other) and Greg Napier, something like that,” he says. Instead, Messick went on tour with one of the biggest bands in the whole fucking world.

On a basketball court on his second day in Montreal, Messick met Arcade Fire’s Win Butler: “We just became best friends and for better or worse, it changed the course of my life.” Butler offered Messick odd jobs while he wrote and recorded The Suburbs, and then asked Messick to tour as his a guitar-tech. Since then, Messick’s life has been the stuff of dreams; he and Butler recently had dinner with Bono.

“I love Win, his whole world is amazing, he’s very fucking talented, and the band is operating on a pretty hefty level. It’s as hefty as it gets actually,” says Messick, who has been with the Arcade Fire almost non-stop for the last five years, including at The Grammy’s, Coachella, Bonnaroo, Glastonbury Festival, Reading, Leeds, the LA Forum, you name it. And because they’re both basketball fanatics, Messick and Butler often hit up NBA games, including the 2014 All Star Game in New York City last year.

“We were courtside and I was next to Karim (Abdul-Jabbar) and across from Jay Z. Win’s a major basketball cowboy. It’s super important. He somehow trusted me instinctively, and I think it’s because we met playing basketball and he could tell what kind of player I was, and he basically trusted me with his life from then on.” But while all of his experiences with the band continue to be incredible, Messick’s had to put his own musical career on hold: “It’s like, one day I’m hanging with Bono, and then the next day I’m back in Halifax busting my ass trying to get a gig at The Seahorse, so actually it’s a really nice juxtaposition. It keeps me hungry. And it’s inspiring to see what it takes to be on that level.”

But he says the life of a major-tour roadie can be out of control. Sometimes you’re up until 4am at a pool party with Queens of the Stone Age and Will Ferrell, and then at 5am you’re on a plane to England to prep for a major performance. “It’s an insane lifestyle,” he says. He also did a cross-American tour as a guitar tech for Edward Sharpe and the Magnetic Zeros. Even still, Messick’s managed to continue writing and recording. He released a solo demo last spring, and a Museum Pieces track on the Plastic Factory Records compilation. He has four albums ready for mastering in the coming months.

Messick’s influences range from regional heroes like Joel Plaskett and Stan Rogers to the “Pentagle British folk stuff” of Bert Jansch, to Nic Jones and Richard Thompson and especially country & gospel king, George Jones. These influences all make sense when you explore Messik’s catalogue. His own influence on the Maritime scene is lightly traceable through bands like Cousins, Crosss' and Jon McKiel.

“The songs I’m playing on Saturday have a pretty 60s-pop vibe, I think it’s something that Halifax bands are good at and it’s a good way to reintroduce myself as well, because that Brit-pop thing is part of me, too,” he says. He explains all the various connections between American and British folk artists he adored while growing up in Pennsylvania before moving to Halifax, and the extent to which it all stayed with him: “I love that troubadour tradition, you know, the ballad tradition that was going on long before guitar, basically troubadours going castle to castle bringing stories, I carry heavily from that.”

Mostly, Messick is glad to focus on his own music for a while: “I watched Win play a thousand times over, I was there every night so I got a sense of the charisma and energy you need. I’ve got the songs and the chops to deliver a good show. So it was a very inspiring time, but I’m looking forward to this.”