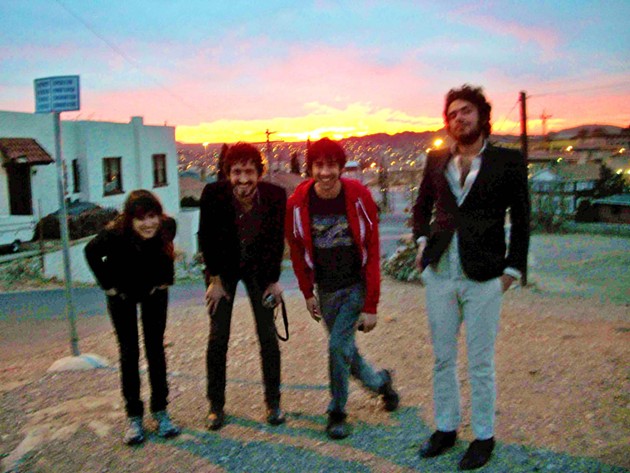 "Bands are like gangs," says Arlo Klahr of Fragile Gang, "Gangs need each other to be strong."

Klahr, a Toronto-born singer and multi-instrumentalist who also lived in Cape Breton, met Aisling Cormack (originally from Ireland) at their El Paso, Texas high-school, "in what I'd call the punk scene," he says. Since then, "We've lived in a lot of different places together — New York, Dublin, Austin, Berkeley — like 'rolling stones, like complete unknowns." A decade ago, the duo settled in L.A. but continue to tour. Klahr says they hate and love it like no other.

The touring duo usually record and sometimes play with Matthew Schmitz (drums) and Kiki Solis (bass): "That's part of the sense of Fragile Gang, we and our friends," says Klahr.

Last November, Fragile Gang released the nine-track album For Esme. It's a painful tribute and a honoured remembrance of one of the band's dearest friends: "Esme Barrera was murdered by a stranger in the early hours of New Year's Day in 2012 in her house in Austin," explains Klahr, "She was an inspiration to us. She was a volunteer at a girl's rock camp in Austin, a teacher for special needs children, a DJ, a record store employee, the life of the party, just full of life."

Despite her petite and shy demeanour, and issues with her health, Barrera was bold: "She was our biggest (and it felt like sometimes our only) supporter." After Fragile Gang's first show, which they thought sucked, "Esme came up to us and said, 'I'm your biggest fan. Can I be in your fan club?"

After Barrera's murder: "We tried to get on with our lives and play and write an album but we just found that many of the songs we were singing somehow revolved around her. Like in, "You Are My Rock N Roll Star," we sing, "I'm in your fan club, / You really move me, / I'll be your roadie." Really, we were her fan club. We took her example and tried to better ourselves."


They started volunteering at an L.A. girl's rock camp: "I was the only boy that year in the camp," says Klahr, "I was one of the roadies. It felt so good to see these young girls rocking out and learning confidence, and all the time thinking of Esme and what she would do or say. Everyone loved her. So thematically, the album is about grief, and there are sad songs, but it's also about celebration and joy. Remembering the joy and the wild life Esme had. Also remembering to try your best and celebrate and live in the beautiful kind warm moments and movements, he says."


For Esme is delicate yet tough and raw and loud: "There'll be a quiet song that comes from our sadness, but then there's one where we've put our all into creating as much joy and volume and noise as we could," says Klahr, "All that leads into 'fragile' and what the name means to us."

I ask about my favourite song from Wire's 1977 record: "The Wire comparison is right on! 'Fragile' has always been a band favourite. And of course there's The Pastels song we named ourselves after off 1997 album, Illumination. Hearing those lyrics and that shambling music and soft voice for the first time solidified a lot of things we had been feeling and thinking about," he says, "I think there's a paradox at the heart of popular music: vulnerability and strength, needing each other, a scene, an audience, a group of friends, a band." Sometimes you need a gang.