Hard Times: the Pro Wrestlers we lost this year 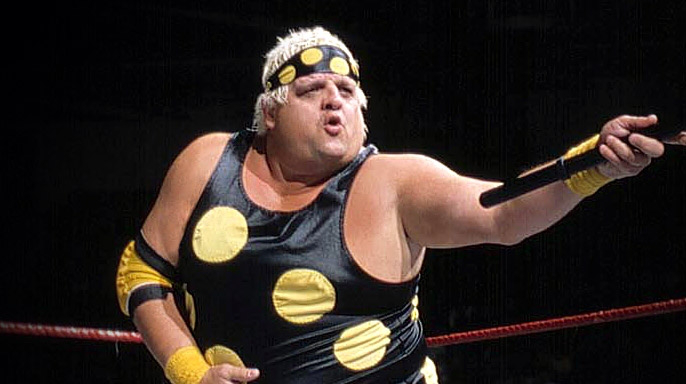 Hard times in wrestling this year — we lost some of the best there ever was and the best there ever will be. I remember the moment I heard about Rowdy Roddy Piper's death, and I knew we'd never see the likes of Roderick Toombs again. Also, remember this Simpsons clip? Oh man, and this one? Haha, "Enchanting musk." Anyway, here's to some of the ring kings we lost in 2015.


One of the best, most charismatic actors in the history of professional wrestling, The American Dream passed away on June 11 at the age of 69. Born in west Texas, Rhodes first appeared in National Wrestling Alliance, Jim Crockett Promotions and then most famously in the World Wrestling Federation. His 'average' physique added to his"Common man" persona, the "son of a plumber" and an outspoken champion of the working class. He appeared in WCW and ECW until 2001, and later returned to the WWE as a booker and producer of NXT. Earlier this year, he appeared on-air with his wrestling sons Dustin and Cody Rhodes. More than anything, Rhodes was an exceptional promotional performer. Like many wrestlers of his era, Rhodes drew on the pace, style and exaggerated oratory of southern Gospel preachers ("The man of the hour, / The man with the power"), best exemplified in the "Hard Times" promo. Bless you, Dusty.

Tommy Gilbert was an old-school-style Tennessee wrestler who came up in the Continental Wrestling Association in the 1960s and 70s, performing in Memphis and other southern and mid-Atlantic cities until later serving as a referee for Mid-South/UWF in the 1980s. He was a highly esteemed mentor to Terry Funk, who has said that Gilbert never got the recognition he so much deserved. "Nightmare Freddy's" owns sons, "Hot Stuff" Eddie Gilbert and Doug Gilbert, took after their father; Eddie especially made his way into the profession by writing wrestling articles about his dad and beginning his career with the ring name "Tommy Gilbert Jr." Tommy lived through the death of Eddie in 1995 before his own death this year on November 26, at age 75. While his promotional style was somewhat subdued, he was a beast in the ring and an avid self-promoter. He loved his fans. There was nothing more southern than his two-boot cowboy boot matches.


Born in Kentucky in 1923, Cora Combs was a classic Hollywood female wrestler; her contributions were recognized at her induction into the Pro Wrestling Hall of Fame in 2007. Originally a country singer, Combs began training in 1949 with Billy Wolfe, the husband of the most famous female wrestler of the post-War era, Mildred Burke. Her time in wrestling would not have been easy; chauvinism and non-payment dominated women's wrestling leagues. Moreover, many report Wolfe to have been a womanizer and an abuser who attempted to discredit Burke after their split in 1952. Regardless, Combs continued to wrestle until 1985, famously against her own daughter Debbie Combs. She died on June 21 at the age of 95.

The Original Nature Boy Buddy Landel was born to wrestle. A high-school dropout from Tennessee, his sister started dating wrestler Buddy Orton, and Landel realized his own assets (he was 6'3'' and well over 200 pounds. He began training with Boris Molenko before he joined Mid-Southern, International Championship Wrestling, Jim Crockett and NWA. He famously feuded with the 'other' Nature Boy Ric Flair (in the 1980s and then later in the 'Battle of the Nature Boys'). The feud lasted his career; they even maintained similar styles and entrance themes. Landel exemplified high-glitz southern wrestling with his willowy blonde locks, his energy on the mic and his overbearing, enormous presence. He was a main-event through and through and his matches with both Flair and Sean Michaels broke attendance records. By the 1990s, along with a serious drug addiction, he appeared on RAW and wrestled Bret Hart, during which he was badly injured. He was an accomplished musician and after his retirement, he did commentary for matches in Knoxville. He died at home in Virginia on June 22, age 53.


Long live the memory of Hot Rod, one of the best wrestlers to ever walk this goddamn earth. Born in Saskatoon, raised in Winnipeg and trained in bagpipes, Roddy was a Canadian judo champion before embarking on his impressive and legendary wrestling and acting career. His iconic moniker was given to him by accident at his first match; his friends played the bagpipes and Roddy handed out dandelions, the announcer stumbled, "Here's ... Roddy, uh, the, uh, Piper." He started wrestling for AWA, NWA Central States and here in the Maritimes until the late 1970s, when he emerged as a villain in NWA Hollywood Wrestling. Soon he was wrestling regularly all over North America and in the 1980s, feuded with fan-favourites Sgt. Slaughter, Ric Flair and Greg Valentine, before joining the WWF in 1984, with many feuds (Hogan, especially) and his own segment, Piper's Pit. Over the next decade, Roddy was a popular character in the company and appeared at many Wrestlemanias, Summerslams, special events and PPVs until his deflection to World Championship Wrestling in 1996, with various nWo feuds. He returned to the WWE in 2003 and remained a presence until this year (Piper's Pit was even resurrected). Along with wrestling, Roddy was a popular actor with lead roles in over a dozen action and sci-fi films like Carpenter's They Live (1988), Canadian indie-horror production Portal to Hell (2015) and the forthcoming wrestling drama The Masked Saint (opening January 8). He also appeared on Walker Texas Ranger, Outer Limits, SNL and It's Always Sunny in Philadelphia over the years. An unreal performer, and a well-regarded, kind man, Roddy Piper is irreplaceable. He died on July 30 of a heart attack, at age 61.