Songs to celebrate the life and music of Jay Smith 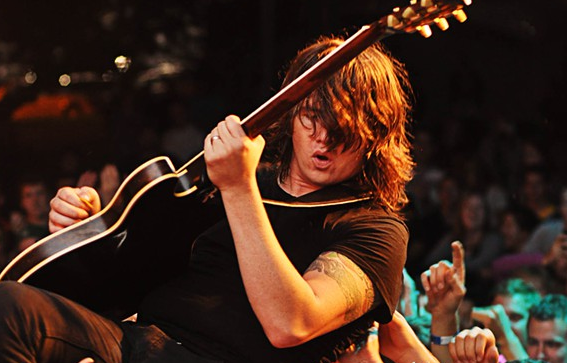 While on tour with Matt Mays in Edmonton, struggling with depression and addictions, Cape Breton songwriter and legendary Rock Ranger James 'Jay' Smith took his own life on March 27, 2013. Musical communities across Canada collectively mourned the loss of one of Nova Scotia's greatest rock musicians, known as the lead of Sydney's Rock Ranger, as the guitarist for Matt Mays & El Torpedo and for his award-winning solo record. Leaving a wife and two children, Smith's friends and colleagues raised over $200,000 to support his family through the loss with a benefit in his name. "Jay’s wit, charm and unparalleled love of music will never be forgotten," wrote Mays that year. "He was our brother and he will live in our hearts and songs forever.”

This Thursday and Friday at The Carleton (1685 Argyle Street), where Smith played on numerous occasions, his songs will once again come to life through The Halifax All Stars, a collection of his longtime friends and fans who will perform the entirety of his 2011 self-titled debut, including Adam Baldwin, Brian Byrne, Mike Ryan, Dennis Ellsworth, Laura Merrimen and more. Proceeds from the event will go to the Mental Health Association of Nova Scotia on Thursday and the Unison Benevolent Fund on Friday, both of which provide support and resources to those suffering from mental illness, especially in the music community. Friends and the tribute's performers remember the life and spirit of Smith through his music.

"Cut and Dry" - Rock Ranger
"If had to pick a tune, it would be 'Cut and Dry' from Rock Ranger's first release," says Ian MacDougall (Tom Fun Orchestra). "Primarily because it rips but also because, for me, it's a blast of nostalgia. A really special music scene existed in Sydney in the early 2000s and Rock Ranger were central to that. It's basically what made me want to start playing music."


"Perfect View" - Jay Smith
Local singers Kim Harris and longtime friend of Smith Mel Stone will perform "Perfect View" at The Carleton. This song appeared on the Rookie Blue soundtrack and also is, as Stone explains, "The country-tinged closing track from Jay's self-titled album. Like many of his songs, it takes on an entirely new context now that he's gone. I was lucky enough to know Jay for over a decade and this one song seems to sum up the complexities of a guy who really did feel everything: 'You can't see the light, / The blindfold's tied too tight with knots you can't undo, / Blocking a perfect view.'"


"Shotgun (Windom Earle Mix)" - Rock Ranger
"Ever since I heard about The House of Rock (Rock Ranger and Slowcoaster's flop house in Sydney), I became a super-fan of the artistic community that they were cultivating in Cape Breton. At the time, I was a Cape Bretoner living in Charlottetown, but I wasn't very active in the local scene," says Windom Earle's Stephan MacLeod. "My friendship with Rock Ranger granted me access to spectacular shows, rambunctious afterparties and sleepy road trips. These experiences inspired me to make music, put on shows and informed everything I know about rock and roll." In January 2001, Smith and Rock Ranger would release a self-titled album of songs they'd been playing. "I was such a fan that I sampled a riff from 'Shotgun' and chopped it up into a silly remix featuring audio from the electronic voice alert system from a 1984 Chrysler New Yorker. I was shocked when the band included my remix as a hidden track on their first album," says MacLeod. "Jay was my hero and it was an honour to have my dumb song included on that incredible album."


"Hurts Like Hell" - Jay Smith
"These tributes are important in keeping the memory of Jay alive," says Cape Breton songwriter Carleton Stone, who will perform the sombre "Hurts Like Hell" with Dylan Guthro. "But also to continue to raise awareness around mental health issues within the music community."


"Livin' a Lie" - Rock Ranger
"I really remember Jay coming out to our Emergency gigs in Cape Breton," says longtime rocker Joel Plaskett, performing as one of the All Stars on Friday night. "He was around in the late 90's Hermit days, as well. I recall a show where Rock Ranger opened the show and I was floored by Jay's guitar sound: his Gibson hollow body through a 50-watt Hiwatt. Dead simple and so mighty like ACDC. Jay's love for melodic songs and the spirit of rock and roll shone through in every conversation we had. His sense of humour was really endearing and unique. I never knew him as well as others, but we actually went back a long way. I still think about him all the time."


"LA Postcard" - The Space Age (cover)
"It's a real special song," The Space Age's Andy Patil told The Coast last year, when the pop-punk trio put out this cover of Smith's "LA Postcard." Patil played in Matt Mays & El Torpedo with him. "When (Jay) first played the demo for me, it had such a post-punk spirit and he said, 'Andy, I can imagine you singing this song.' I told him if ever got my own band, we would play it."


"When the Wheels Slow Down" - Jay Smith
"To know more about Jay, all you have to do is come to one of these shows. To me, that says it all. Jay was magnetic," says John Mullane (In-Flight Safety), who will perform his favourite Smith song, "LA Postcard," with The Halifax All Stars. His other favourite? "If REM, Wilco and Crowded House had a baby, they would name it 'When The Wheels Slow Down'," Mullane says.

If you or someone you know is at any risk of self-harm, contact one of Nova Scotia's suicide crisis centres, Community Mental Health Services, Addiction Services, or call the toll-free mental health hotline at 1-888-429-8167. Read about the Unison Benevolent Fund here.