BurgerFriesPop is a winning combo

Releasing an EP to coincide with Burger Week, the group likes to have it their way 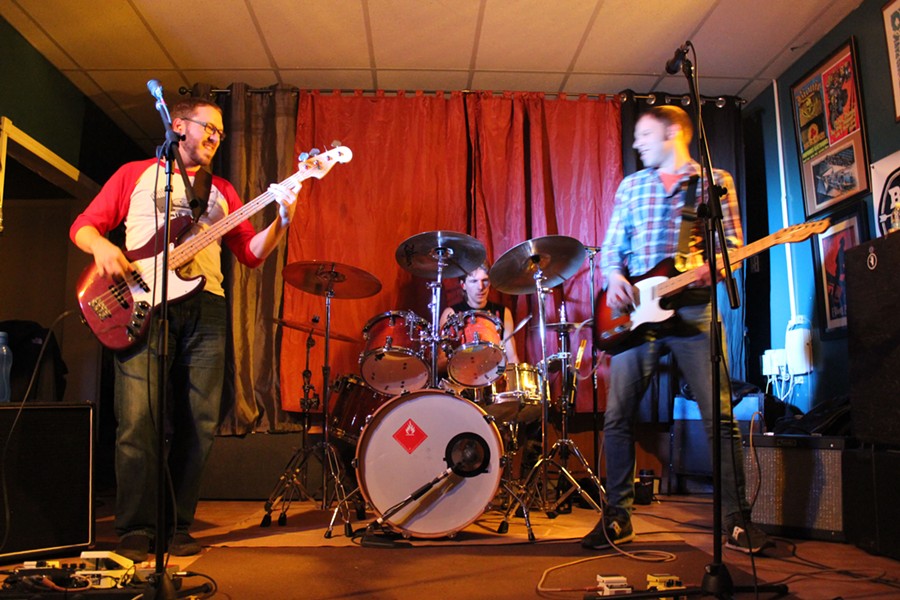 “It was totally on purpose,” says guitarist and vocalist Dale Boudreau on new wave trio BurgerFriesPop’s decision to release their EP during Burger Week.

With all of the online rumbling about The Coast’s ever-popular week-long excuse to stuff your gob with burgers, the band took the burger-themed momentum and are now releasing five songs with a show at the Local with Jessie Brown, FM Berlin and Bad Partys (Friday, March 24, $7, 9pm).

“We had to make it special,” says drummer Martin Maunder. Boudreau, Maunder and Terry Boudreau (brother of Dale) on bass and vocals make up the group, who write surfy, rocky, angular songs and subscribe to a DIY philosophy. On their Facebook page they list one influence: Minutemen. And much like the punk icons, they jam econo. "We like doing stuff ourselves," says Maunder, who also runs Carnivore Records and Herbivore Bookings. "I was sitting at home cutting out J cards for the tapes, I made the art myself, I'm making buttons—I like the hands on approach."

"We were all hands on," says Dale. "We wanted to do it the way we wanted to."

Recorded and produced by Maunder, the songs are a small sample of their oeuvre, and what they considered to be a good starting point. "We all love different types of music, we try to bring out what works for the band," says Terry. "Whatever fits the song the best."

Part of the group’s impulse is to provide a counter to mainstream rock, and they don’t shy away from politics. "Mainstream music doesn’t seem fun or proactive or encourage people to think," says Maunder.

"You’ll hear Martin and I arguing over the state of current affairs on the recordings," says Dale, "but we don’t choose sides, the way we see it is it’s us against everyone else."

And though they may argue, they bond over a good combo, just as their name may suggest. Named after the #1 combo at A&W—a nod to their three piece rock combo status—the name has gotten them immediate fans, they say. Not to mention it’s a great excuse to eat fast food every week at practice. Dale’s usual order is three bacon McDoubles, he gives the fries to longtime vegetarian Maunder and a shake or smoothie for the health conscious Terry.

"We were gonna make our own wine and start calling ourselves BurgerFriesWine," says Maunder.

"That’s what happens when everyone hits their mid 30s," says Dale. "They stop drinking pop and drink wine instead."