Have a memorable Memorial Cup kickoff weekend with these Sure Things

May 16, 2019
comment
A roller disco party, Mayworks Festival's climate change cry, Motorhead-y metal from Pale Mare and, of course, the first weekend of the Memorial Cup makes for an extra-memorable weekend. 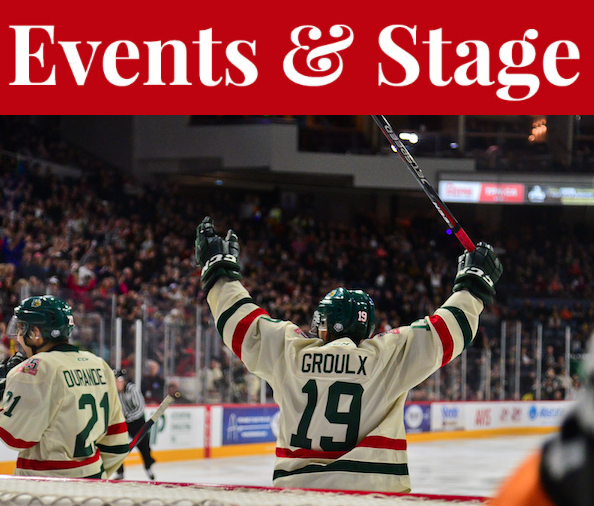 the effects were cumulative and i almost didn't notice
Saturday
Mayworks Festival—the fest blending arts and activism as it explores life for the working class—continues with this 250-minute piece by performer and artist Colleen MacIsaac. A meditation on climate change and human habits, you can catch snippets (or sit for the whole thing, you champ) at Glitter Bean Cafe. more deets

Memorial Cup: Prince Albert Raiders vs Halifax Mooseheads
Friday
As the Memorial Cup gets underway, this game provides a rare chance to see a west coast team while also letting you check in on the hometown effort, too. It all goes down at the Scoitabank Centre. more deets

Brundibár: A Children's Opera
Saturday, Sunday
The Halifax Theatre for Young People presents this written-for-children opera, which was penned in Prague in 1938 and performed at Jewish orphanages and concentration camps across the German occupation. The tale of children who are chased from the marketplace by a cruel organ player is billed as "light-hearted and a great opportunity to introduce children and youth of all ages to the topic of the Holocaust and racial discrimination." See it at Sir James Dunn Theatre. more deets

Coffin Skate's roller disco
Friday
An old-school roller disco par-taaay—complete with lights and a DJ—to get your spring started with peak That '70s Show vibes. An after party in the upstairs lounge of the Mayflower Curling Club keeps the good vibes rollin'. more deets

BIGsmall
Thursday, Friday, Saturday, Sunday
A smattering of works from the Saint Mary's University Art Gallery's permanent collection, this show acts as a study in contrasts, with opposing subject matters, compositions and, yup, sizes facing off on the gallery walls. more deets

Silverwigs w/Cuddlefish 3000
Thursday
Hooky pop-punk all the way from Japan, Silverwigs is doling out sonic tonic you don't wanna miss. Sharing the bill (and an upcoming split LP) is Cuddlefish, the heavy, Jawbreaker-influenced pop punk act from Georgia and Montreal. Catch the show at Radstorm. more deets

Pale Mare w/Enemy Designed, Doom Machine, Halva
Saturday
Stoner-sludge outfit Pale Mare could be called Motorhead slowed down or Sleep sped up. See it at Gus' and know you're catching a glimpse of Canadian metal's next big name. more deets

Sloan
Saturday
Day two of the free, open-air fest on Argyle Street that boasts a host of the city's biggest names—and, oh yeah, day two of the Memorial Cup—continues with this set by the the landmark Halifax-born band. more deets
Prev
Next