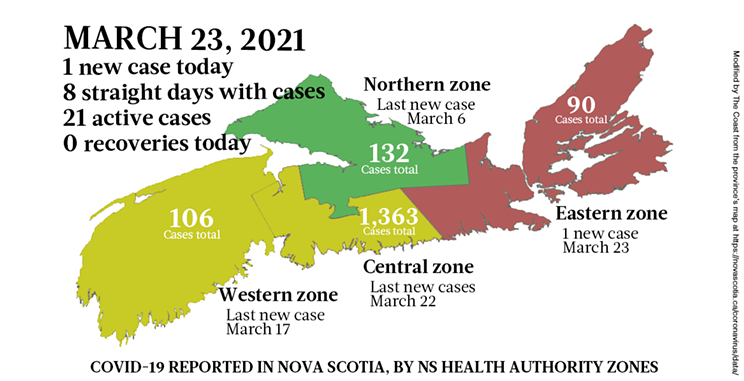 "The case is in Eastern Zone and is related to travel outside Atlantic Canada," says the province's Tuesday press release report. For a more focused location than the entire Eastern health zone, our table below, which pulls together other data sources, places the traveller in the community health network that includes Sydney, New Waterford, Sydney Mines, Glace Bay and North Sydney. The NS Health Authority calls this the Cape Breton County Community Health Network. We know it simply as Sydney.

No C19 patients recovered between yesterday's report and today's, so the new case brings the province to a total of 21 active cases. Nobody is in the hospital receiving treatment for the disease.

Local labs processed 1,756 tests for the virus. That's up from the 1,300-ish tests announced yesterday, but still below the seven-day rolling average of almost 2,000 daily tests.

And in welcome news, after some undefined glitch prevented the data from coming out yesterday, the province reported its first vaccination numbers since last Friday's report. Today's data shows that 8,251 doses of vaccine were injected over the course of Friday, Saturday, Sunday and Monday. That's more than 2,000 vaccinations per day on average, a respectable amount any day, an absolute miracle for a weekend.

What caused this weekend's vaccine breakthrough? We don't know yet. The subject didn't come up at Strankin's regular C19 briefing earlier today, so we've asked the department of health and wellness' press relations peeps. Our hopeful hypothesis is that the province used to suspend vaccinations on Saturdays and Sundays, but finally got serious about using those weekend days to do anti-pandemic work. We await solid information to find out if weekend vaccines are happening.

One thing potentially skewing the data is today's report accounting for four days, because of yesterday's glitch, when most weekend numbers are for three days. Last Wednesday the province set a record for daily doses injected, then broke the record Thursday with nearly 3,000 doses. If that pattern continued—and accelerated—on Friday and Monday (say something like 3,600 injections Friday, 4,600 Monday), the province could theoretically reach the 8,200 vaccines in today's report without giving injections on Saturday or Sunday.

In that scenario, which imagines constant record-setting weekday performance to legitimize the vaccine rollout taking weekends off, the numbers would be less respectable without yesterday's reporting glitch. Keeping the same made-up numbers for our completely speculative situation—that's your reminder this is only a thought experiment because we don't have the information from the province yet to explain what's actually going on—the daily average injection total drops.

With the (real) glitch and the (imaginary) vaccination numbers, we get 3,600 shots Friday, zero Saturday, zero Sunday and 4,600 Monday for a four-day total of 8,200 vaccinations. More than 2,000 per day on average. Respectable when last week's record was not quite 3,000 in a day.

Without the glitch, we get an imagined 3,600 shots Friday, zero Saturday and zero Sunday for a three-day total of 3,600 vaccinations. That's 1,200 shots per day. A number that is really only respectable compared to past weekend averages like 250 or 400 shots per day.

But remember, we're talking about a way it would be possible for the vaccination effort to shut down on the weekend while still delivering the real number of 8,200 vaccines from Friday through Monday. If our hypothetical Friday delivers 3,600 doses, and vaccinations stop Saturday and Sunday, hypothetical Monday has to deliver 4,600 doses. And if the province actually had the ability to deliver 4,600 doses in a day, it would be unconscionable to take the weekend off instead of using Saturday and Sunday to vaccinate 9,000 more Nova Scotians.

We much prefer the scenario where the province vaccinated 8,200 people in fours days by realizing it could run vax clinics on the weekend. Either way, though, we're eagerly awaiting the province's information to find out what's really happening.

Where Nova Scotia’s COVID-19 cases are on Tuesday, March 23