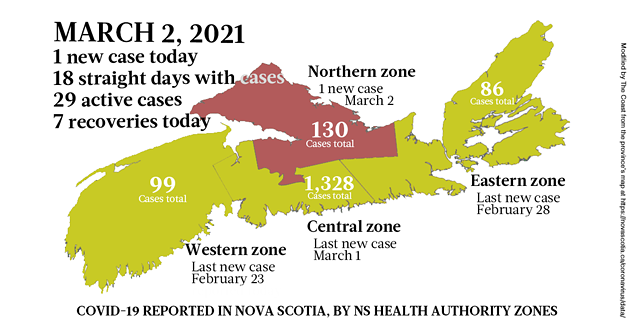 Tuesday brings good news in terms of new COVID-19 cases, testing and recoveries, but bad news for patients getting admitted to the hospital and virus variants. Let's start with the good news, because we can.

For the second day in a row, Nova Scotia is reporting only one new C19 infection. "The case is in Northern Zone and is a close contact of a previously reported case," says the provincial update to media.

After the 10 cases on Friday, when premier Iain Rankin and top doc Robert Strang imposed a month-long lockdown on Halifax, there have been nine cases total in the last four days, none of them classified as "under investigation" by public health as potential community spread. And that's with testing increasing sharply: Strang and Rankin's calls for people without symptoms to get C19 tested lead to a Nova Scotia record of 4,839 tests in a day that the province reported Sunday, which got broken by the 5,146 daily tests reported today.

Recoveries are up, too. Seven people who had the disease have recovered since yesterday, more recoveries in a day than the province has had in over a month (January 19 also had seven). Nova Scotia now has 29 active cases, down from 2021's record high of 39 last Saturday.

But hospitalizations are increasing. Today there are four people in the hospital due to C19, up from two yesterday. In the grand scheme of things, four hospitalizations may not be a lot, and only two of those patients are in the ICU. However, it's never comforting to have the hospital coronavirus caseload increase by 100 percent.

Both of these mutated C19 strains apparently make the disease spread more easily in humans. The B117 cases came from the Western and Central health authority zones. "The people were tested late last month," says the province. "One case is resolved, the other case is self-isolating."

"This brings the total number of cases of the UK variant in Nova Scotia to eight and South African variant to six."